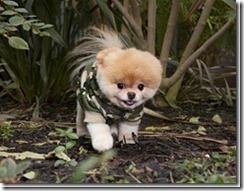 About a year ago I wrote about the world’s cutest dog, Boo, the Pomeranian. He was featured on Good Morning America again today, he is still really cute, but really, he has a second book out, has his own Facebook page and I don’t know what all else, not to mention product endorsement. His owner keeps to the background, but there were pictures of Boo paw signing his books, poor little bugger doesn’t know what’s going on, although I must admit none of it seems to faze him. I really think the owner is taking all this a bit too far. This morning he was featured in all kinds of different get ups, glasses, you name it. I would say its getting a bit much.

Because our 40th anniversary is coming up next month, I have been thinking about it all a fair bit, and this weekend in particular I was thinking about Matt’s parents when it was their 40th and we had them over for dinner. We made a crown roast of lamb, with the paper frills on the bones with cherries in them to signify rubies. Then we made a Croquembouche (means crunch in the mouth which took us a while as we were both working at the time. We would make something and freeze it then later something else and so on until it was ready to assemble. This is a picture although for the top I did a huge red rose being their 40th. There’s actually a little too much yellow in this paper, but I am not the world’s best at scanning. I don’t know if you can tell, but the base is a Génoise Base for Petits Fours cake, which is covered in Fondant Icing and then coated in pistachio nuts Then the profiteroles are added, some with chocolate icing and some with royal icing glued together with caramel. Once assembled you add crystallised fruits in between which are held in place by thick whipped cream. We made everything. Not frantically difficult but time consuming. So, the other day, I looked up Croquembouche on the internet and found the simplest of recipes, nothing much more than assembled profiteroles. No cake, no special icings, no crystallised fruits. Not the real thing at all. I am not going to try and share the original recipe with you because it comes from an Italian book of ours which tells you to take 1 recipe from 2017, 1 1/2 recipes from 1555, etc. etc. and drives me nuts to use it. We have another favourite recipe which I went to the trouble of working out exactly all the quantities of what and putting it into one recipe. Took a while, but at least one is not forever turning pages. I had vaguely thought of making another for our own anniversary, but I don’t think so. Don’t think I could do all the standing involved any more.

Barrie’s Asparagus Farm, where I spend a lot of my time during asparagus season, has introduced a new mascot today which will apparently be seen on all their labelling from now on. Tim Barrie asked people to guess the name to win a dozen corn on the cob. The name is Gus and the prize was won. Not by me I hasten to add. A dozen corn would be no use to me anyway as Matt doesn’t eat it. I also qualified to win two ears, but the farm is quite a distance, so I will not be collecting.

Off to see the orthopaedic surgeon today, changed appointment, I am expecting a hip replacement. I am also vaguely expecting them to do something about the lumbar region in my back – have a feeling I won’t be doing much bowling this winter.

Just to show you the kind of recipes in our Italian book, here is the one I sorted out. The picture is not the recipe, just one I found of the ingredients. Looks quite good though, should check if there is a recipe for this picture. The recipe below is one Matt prepared for me for my birthday some years ago, he then followed it with lobster. He surely knows the way to my heart. By the way, if you are watching your fat intake, do NOT try this dish. I would also add this recipe is quite short compared to the one for Croquembouche. 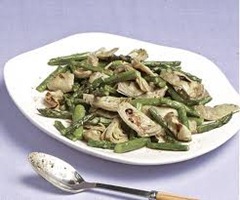 ARTICHOKES RICCA: Combine Mornay and Duxelles in shallow oven proof dish. Arrange asparagus in centre, artichokes round edge. Sprinkle with cheese and melted butter. Cook at 500°F for 8 mins or until cheese is light gold.