So yesterday I went and paid for my driver’s license which apparently will take up to 6 weeks, why on earth, I wonder. I guess that means I will only have a temporary license when we go away along with my temporary health card. The mills of God and governments grind slowly. I was surprised this time for both cards that I had to take off my glasses, as Matt points out, one looks totally different without them and I wear mine all the time. In my two previous cards, I was wearing them, go figure? I have also recently discovered that we can use these to cross the border into the States and don’t need a passport. However, as Matt says, you never know when we might need one.

We have friends coming over for dinner tonight and then we got an invitation yesterday, to go visit some other friends at their trailer today. Why do these things happen all at once? Funnily enough, I only recently discovered these friends have their trailer where we used to have ours many years ago. Coincidence, or what? I’ve just remembered it’s a holiday on Monday too, Civic Holiday, usually forget about these things as, it could be said, we are on holiday all the time. Its OK, our invite has been changed to Sunday.

Last night I watched Shrek Forever After, quite funny in a way, especially the overweight Puss in Boots. I was amused by Donkey’s children by the dragon, they were flying donkeys. I rented it from iTunes.

I’ve lost a cookbook, I cannot for the life of me understand how this came to be, but I have definitely lost it. It is a little book I bought in Norway a looooooong time ago 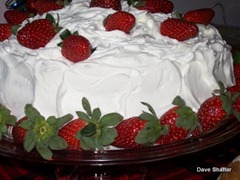 called What You Have Eaten in Norway. The one thing I was particularly looking for was Bløtkake which when I had it originally, in Norway, was one of the most delicious confections I had ever eaten. I have only ever made it once, with my weight, it isn’t something one should eat too often and, come to think of it, with North American cream it just wouldn’t taste the same. I found an article about Bløtkake here and they have several options for making the cake – these were also given in my missing book, but they don’t include the one where you soak the cake in thin cream and sherry, then load each layer with thick cream containing chunks of pineapple, then cover the whole cake with slightly sweetened cream and decorate with pineapple slices. Its to die for. However, most of the pictures on the internet are either of the cake covered in marzipan, which is an option, or decorated with strawberries. Luckily I did find a copy of the recipe because I blogged about it in 2007 so here is the actual recipe. If you live in Europe, no problem, like I said, not sure how it would work with cream on this side of the pond. Now I will go look for this cookbook, it cannot have disappeared.

This is a special cake from Norway often used for celebrations. 1. Whisk eggs together with sugar for half an hour or until the mixture is thick and creamy (or use a mixer). Fold in cornstarch and flour previously well mixed together and finally the cold water. Bake in a slow oven in a round cake tin for 40-50 mins.turn out and cool. Divide the cake in 3 layers, sprinkle each liberally with thin cream to which sherry (and nuts if desired) has been added, or with neat sherry. Between each layer spread a thick layer of whipped cream and either nuts or pineapple chunks. Cover the top and sides with a thick layer of lightly sweetened whipped cream  and decorate with pineapple slices.