An amazing story, a thief returned stolen items to a house together with $50 to

repair a broken screen, his note was full of apologies and said he would also be doing community work to atone. Oddly enough, the family didn’t even realise they had been burgled, it apparently happened whilst they were out for a walk. The police point out that even though the thief returned everything, he/she might still be liable for prosecution, this may not be the first offence even if the note said it was. It sounds genuine to me, but what a dreadful situation when someone has become so poor they feel burglary is the only answer. There is no doubt things are getting harder for people, we notice things are tight these days, groceries having gone up a bundle, and the drought won’t help anything either. Maybe I should take up burglary too LOL. One grouse of mine is that there doesn’t seem to be a lot out there to help seniors in health and financial difficulties.

What with one thing and another, yesterday turned out to be ‘one of those days’. It started off with the woman who cleans for us thinking she had to turn up an hour 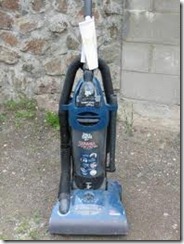 later, no idea why she got that idea into her head. Then I was trying to prepare stuff for supper and kept being called away either by her or Matt for various reasons, finally she told us that the vacuum wasn’t working properly. On investigation it turned out that the belt was broken. Not bad for about 10 years or so. I then started phoning places for repairing vacuums, the first place didn’t repair Dirt Devils, the second place, I left a message, the third place their vacuum repair person had broken his leg in May and still wasn’t back, the fourth place didn’t do Dirt Devils either, however, they did recommend Duffy’s which was close by. Brilliant. We had the belt and Matt tried to do it himself, but found he just could not stretch it far enough, went to Duffy’s and the guy, Greg, fixed it in a few seconds flat, put a sticker with the shop’s name on it on the vacuum and didn’t charge us a cent. As the store is virtually round the corner, we were delighted. I also ordered some more belts from Royal who make this vacuum. It is a heavy beast, but very powerful.

A report in the news, an Australian billionaire, Clive Palmer, is planning to build a real life Jurassic Park and has been having deep discussions with the people who cloned Dolly the sheep about cloning a dinosaur. As the article says, didn’t he see the ending of the movie? The park is also supposed to have a Sky Needle, a casino and a giant Ferris wheel to rival the London Eye. The article describes him as an eccentric. If he is planning to have a real live dinosaur running around loose, I would say he definitely is eccentric.

This looked a really nice, refreshing salad for this continuous hot weather. I found it at Cooking.com. I was going to post the Mushrooms Canada recipe, but as it was so similar to the last recipe, I thought I would save it for a day.

In Sicily, this salad is traditionally prepared with wild chicory, a slightly peppery, 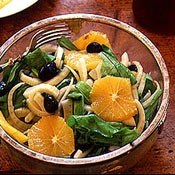 tender leafed green. When unable to find it, you can substitute arugula.
INGREDIENTS

Trim off and discard peel and all of the white pith from oranges, then slice crosswise into thin rounds and set aside. Mix together extra virgin olive oil and red wine vinegar in a large salad bowl, then season to taste with salt and freshly ground black pepper.