RIP Phyllis Diller. I was sad to hear she died today and astounded that she was 95, I hadn’t realised she had lived that long. Wonderful comedienne and a pioneer in the field.

ays been nervous passing under cranes and this is the reason why. It is not, by any means, the first time this has happened. In this case the crane operator was trapped as well as a bus full of passengers. They say no injuries have been reported. I hope none will be. The crane brought down power lines which were on the bus apparently, but people left the bus safely without getting electrocuted I am pleased to say.

We seem to be breeding murderers who like dismembering their victims

, Toronto police have been fishing all kinds of body parts out of the Credit River and a nearby creek. It has been established all the parts are from the same victim but as yet I guess they haven’t established who that victim may be and are still looking for the rest of the body. This is the second case recently, the first one, a suspect has been apprehended, in fact this current case might be recent enough to have been the same perpetrator, my thoughts not theirs. 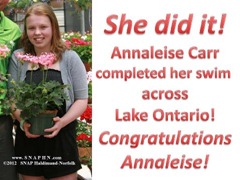 The youngster, Annaleise Carr who swam Lake Ontario on Sunday has set a record, she was only 14 yrs. old. When she got close to Toronto she had to swim around for a while in order to avoid very strong currents out of Toronto Harbour so altogether it took her 27 hours. Her reason for doing the swim was to raise money for Camp Trillium which is a camp for children with cancer; she has raised $70,000 to date. I still haven’t heard anything about people swimming the English Channel unsupported.

From the cooking group I belong to on Yahoo Groups, quite a few of us enjoy rhubarb in one form or another, so, for my Recitopian friends here is a recipe from Cooking.com which I hope you enjoy. 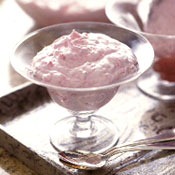 This dessert is called a fool because, well, almost anyone can make it. Just combine the stewed fruit with freshly whipped cream.
INGREDIENTS

Trim the ends of the rhubarb and, if the stalks are more than 1 inch thick, cut them in half lengthwise. Cut the stalks into 1-inch-long pieces.

In a stainless-steel pan with a tight-fitting lid, combine the rhubarb, sugar, candied ginger, and fresh ginger. (There’s no need to add water; though it will look dry at first, the rhubarb will release enough water to cook without scorching.) Cook over low heat until the rhubarb is tender and falling apart, about 30 minutes. Refrigerate until well chilled.

Whip the cream until it holds soft peaks. Gently fold in the chilled rhubarb mixture until well combined. Spoon into serving glasses or bowls and chill until ready to serve.