One week today we start the winter bowling season again, we miss three weeks though b

ecause we never bowl on Labour Day, the one day of the year when the woman who runs the place is always off, and then we will be on vacation for two weeks. No doubt we will be doing some 10-pin bowling whilst in North Carolina. I follow MacDaddy’s on Facebook which is where we go when we bowl down there. They have been having all kinds of lunch or dinner specials on with specials on shrimp appearing once or twice. We occasionally have lunch there with our friends before we bowl. Their food isn’t bad.

Over the weekend I finished my second Alcatraz book, Alcatraz versus the

Scrivener’s Bones. The funniest thing, to me, was an extra two pages after the end of the book for those who cheat, detailing how someone died who didn’t actually do so in the story. If you did cheat you would have been upset to read about the death of the character which is intended to be a punishment for cheating. I think Brandon Sanderson is totally zany with these books. They are intended for a much younger audience but I am thoroughly enjoying them I am impressed with his totally different humour.. The next book is Alcatraz Versus the Knights of Crystallia.

At the time of writing there is a teenager attempting to swim Lake Ontario. It set up a train of memories in my mind. When I was about 14 we were living on a canal in Lincolnshire, England, and one morning, before I went to school, a man went into the water and swam to the beginning and back (don’t remember how far) but basically he was swimming all day and didn’t get back til late evening. I vividly remember my mother saying that, all day long, whatever she had been doing, she kept thinking about him still swimming. I don’t know much else about him other than he was practicing to swim the English Channel which he subsequently attempted towing his own supplies and completely unsupported. Unfortunately he went missing. I started wondering who he was and whether in the intervening years anyone else had attempted the same thing and had success or otherwise. I tried Googling without result. I have emailed a Channel Swimming group who may have records. Whilst trying some research I came across videos of people actually doing the swim, dunno why they do it, they are nuts. Here’s one of the ones I found. I had never thought about the problem of crossing the shipping lanes.

I don’t often snack between meals or when travelling, but this recipe sounded good and as we will be driving to NC very soon, I just thought it might be useful. One thing I am not quite sure about, do you shell the edamame or not?

Frozen edamame in the pod are easy to find in most supermarkets these days. 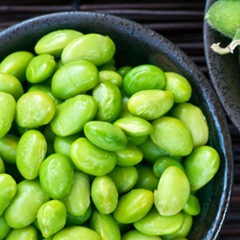 This recipe will make them your new snack favorite on any Phase of the diet. While the edamame are best served warm, they can also be chilled for a take-along snack.