Incredible story on CBC news about a couple living in a house in Varney, Ontario who had honey dripping on them from the kitchen ceiling. Turned out they had 80,000 bees living in

the first floor ceiling. They apparently contacted their insurance company who said they wouldn’t pay for an infestation of bees, then a pest control company couldn’t guarantee complete removal, they eventually called a bee keeper which is what I would have done in the first place. The honey comb was removed and a queen found together with 100 kilos of honey!! The article doesn’t actually say, but presumably the bees were moved as well. I guess they would follow the queen. I would have wanted some of that honey. I noticed in the comments someone talked about the bees stinging the baby. Bees don’t sting unless they are attacked, if they do, they lose their stingers and die. Wasps, which are often called bees here, or yellow jackets, sting more easily and do not lose their stingers.

Ontario Day Neutral Strawberries – I thought this video was very interesting to us Ontarians at least. 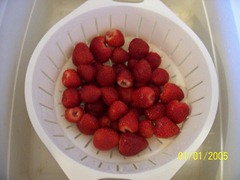 months. Growers explain how its possible to pick strawberries for a much longer season and the differences between June and Day neutral strawberries. The best part, they tastes great! Brought to you by the Ontario Berry Growers Association. www.ontarioberries.com”. So I bought some yesterday and we ate them for supper with some Devon Cream. Of course I hulled and washed them first, and tried one – it was surprisingly good, I wasn’t sure I totally believed the video above. Then we ate them and both enjoyed them very much.

Matt pointed out, yesterday morning, that its only 5 weeks before we head out for vacation. It’ll be great to get away.

I found this recipe on Facebook and finally traced it down to Betty Crocker but even then I am not sure who’s recipe it is. Looks like it belongs to Paula Kittelson.  I drooled when I saw the picture so just had to share it. At the bottom they mention keeping dulce de leche on hand and I know one can buy at my local grocery. Salting chocolates or candies seems to be all the rage these days. I tried them and after a few bites, I found it to be pretty good. You could also make this without salt if you absolutely must. 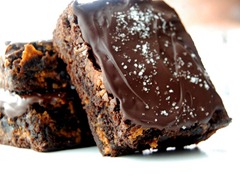 To save time, you can substitute 1 can (13.4 oz) dulce de leche (caramelized sweetened condensed milk) and skip step 1.

Store brownies in the refrigerator up to 3 days. They taste even better the longer they sit!

Dulce de leche is nice to have on hand for making these brownies. Also try it drizzled on dessert pizza or ice cream, or use it to make frosting.