I am disgusted by the behaviour of everyone with regard to Prince Harry’s nude pictures. I 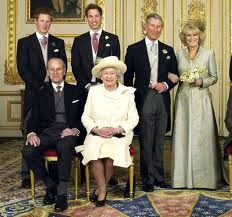 n the first place I think its terrible that anyone should accept his hospitality and then repay it with betrayal, selling such pictures of him for money. Then to distort family pictures showing the queen in them and adding a nude picture behind her is, in my opinion, not funny, its disrespectful and extremely distasteful. Maybe  your grandmother would enjoy family pictures distorted in such a way?  No, its not a joke. I am also surprised at my friends who have posted or shared the picture which is currently on Facebook. Maybe I’m old fashioned, but I see nothing humourous about any of this. At the same time, I see nothing wrong with Prince Harry ending up nude after a game of strip poker, I just think people are making too much of it that’s all. If I’m not mistaken this was Charles and Camilla’s wedding day, would you like someone to do that to your wedding pix?

I was sorry to hear of the death of Neil Armstrong on Saturday, all of us, who are

old enough, remember him hopping around on the moon and saying his famous “One small step for man, one giant step for mankind” speech. What an exciting day that was. We really haven’t progressed that far since then and now the US space explorations have shut down anyway. They are spending too much on wars to have money for space. Pity.

Personally I have had a lousy few days health wise, but like to believe I am on the 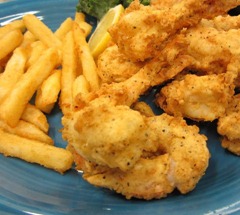 mend now. Sorry about the lack of blog on Saturday Our winter league bowling starts today but then we only bowl a couple of times and take three weeks off to go dahn sahth, although we are actually only away for 2 weeks. There is a new seafood restaurant I want to try on the waterfront in Morehead City, looks really good and advertises that all their fish is fairly local. Its Sammy’s Seafood House and Oyster Bar. The picture is of all fried food but I assume they serve steamed or pan fried as well. We shall see. I will definitely check out their oyster bar. I can chuck oysters down my throat as fast as anyone, I love ‘em. My parents would have been staggered because I wouldn’t touch them as a young woman, even up to much later years; can’t remember what started me liking them now, it was having them steamed I know, and in the Carolinas too, but when it happened, I haven’t a clue. Once we are in the Carolinas I am not sure how many blogs I will post as the cottage we are renting doesn’t have wifi. The realtor does, but they are not that close.

Now this recipe really appealed to me and I will certainly give it a go next time I host a dinner party. I found it on Cooking.com 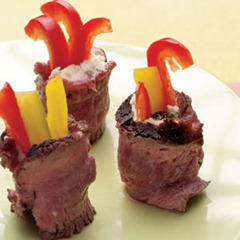 For an even quicker preparation, try deli roast beef.
INGREDIENTS

16 thin slices grilled steak, such as filet mignon (about 8 ounces)