Horizontal Bar, Olympic Condoms for Olympics but none for Singapore.

Last night we were watching the Olympics and then Matt went to bed but I carried on and was lucky enough to see the young man, Epke Zonderland, from the Netherlands doing his gold medal horizontal  bar performance; and what a performance it was, three releases following each other – absolutely incredible. Sorry if you aren’t interested, but this is a video of him. Not only that, he sticks his landing perfectly. Good looking young man too, but he’s only 25 LOL.

Olympic village. I suppose I should be delighted that they are supplied with condoms, but really!! Its not even as if they are being sold to the athletes Durex is supposed to be the official supplier and sent 150,000 free condoms to the village, but officials are upset because condoms made by other manufacturers have turned up, according to athletes living there. They have even had photos of the errant condoms on Facebook. One posted by a BMX cyclist Caroline Buchanan showing a bucket of Australian condoms with a notice “Kangaroo Condoms for the Gland Down Under”. I must say its not something I had ever thought about, but if I did, I would assume such liaisons would include condoms provided by the participants themselves, not handed to them for free. Sounds as if a lot of sex takes place in those villages; not really surprising I suppose bearing in mind the pressures they are living under. Makes me think of a movie I saw once, The Year of the Sex Olympics which was actually more about governments controlling audiences through TV than anything else,  but it was the name which brought it to mind.

Now here’s a country that doesn’t want condoms, tomorrow is Singapore’s celebration of their independence and they are asking everyone to make love on that day in order to increase the birth rate. They even have a rap video being broadcast to encourage people. What a hoot when other places are so over populated.

I’m a sucker for anything meringue so obviously I couldn’t resist this recipe when I saw it. I have made Pavlova cakes of all kinds in the past although I doubt I will be making this one, meringue is so full of sugar after all and I know I couldn’t resist pigging out. Takes me back to the time we spent in Cornwall many years ago, where we found a restaurant which served meringues and clotted cream for dessert. By the end of our stay there I had progressed from one meringue to 3 or 4 with correspondingly more cream of course. They may well have had other desserts there, I have no remembrance of them! 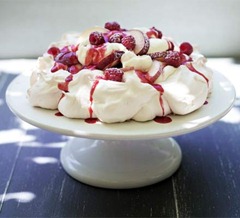 Heat oven to 120C/100C fan/gas ½. Line a large, flat baking sheet with baking parchment. Tip egg whites into a large bowl. Sift together the sugars. Blend the cornflour, vanilla and vinegar to a paste.

Whisk the egg whites until stiff, then whisk in the sugars, 2-3 tbsp at a time, alternating with the paste. Continue whisking until the meringue is thick and marshmallow-like.

Spoon the meringue onto the prepared baking sheet and spread to a 22cm round. Use the back of a metal spoon to make a shallow dip in the centre for the filling. Bake the meringue for 1½ hrs, then turn off the heat and leave it in the oven to cool. Transfer to a flat serving plate.

Put ½ the raspberries in a pan with the sugar and 2 tbsp water. Bring to the boil, stirring to dissolve the sugar, then cook for a few mins until the raspberries are soft and pulpy. Tip into a food processor with ½ the remaining raspberries and whizz to a purée. Press through a sieve into a bowl to remove the pips. Cool.

Halve and stone the peaches, then cut each half into 4-5 slices. Whip the cream until stiff. Drizzle over half the raspberry sauce and fold in gently with a large metal spoon to make a ripple effect. Carefully spoon the cream into the centre of the meringue. Pile the peaches on top and scatter with the remaining raspberries. Drizzle with the remaining sauce and dust lightly with icing sugar. Serve without delay.