Today is Civic Holiday in Canada, if you are Canadian I hope you have an enjoyable day off. We’ve had some rain in the last 48 hours, so, much as we need it, I hope it doesn’t spoil your day.
I was so thrilled to see Usain Bolt defend his Olympic title yesterday, with a new 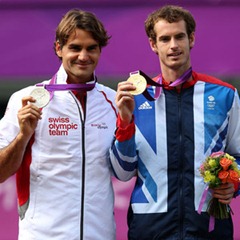 record time of 9.63. At first it looked as though he wasn’t going to do it, he didn’t start very well, but he picked up and surged forward. What a sprinter. He seems like a nice man too, they had a bit of a background about him and he has done a lot for the schools and hospitals in his area of Jamaica. The British were particularly thrilled that Andy Murray won the Olympics gold for tennis yesterday too, beating Federer who is Matt’s favourite. Don’t quite understand why he is wearing a Swiss Olympic Team jacket. Seems a little odd. Maybe he swapped it with someone. Saw the winner of one 400m heat, Kirani James of Grenada swap his number with the South African runner Oscar Pistorius known as Blade Runner.

because Female Trees are Messy, dropping fruits and seeds all over the place. However, male trees tend to cause pollen allergies. It is not something I had ever thought about, one is aware of male and female plants, but I hadn’t thought about the same being true of tree

s. The picture shows sycamore trees, we have lots of sycamores at the front of our building which, as we get lots of seeds, I am now assuming must be female trees. I know these seeds do make one hell of a mess in season. It also says that if your neighbour has a male tree which is causing you allergies, plant a female of the same species in your own yard.

Scientists claim a breakthrough in malaria research in as much as they have identified the protein which allows some people immunity from the bit of the female anopheles mosquito which carries the malaria disease. This is of major importance to some countries, I know when my father was stationed in what was Rhodesia, during WWII, he got malaria and had problems with it for the rest of his life. For those who don’t have access to modern medical facilities it can, apparently, be life threatening. I didn’t know malaria could be a killer disease, but I do remember my father having very sick turns when I was young. I don’t remember anything in later life so I assume it dissipated over the years or something. I honestly have no idea what happened. 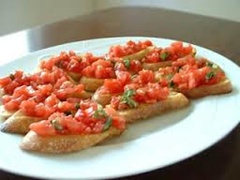 which I posted a few days ago. It was delicious, there were some peppers left over so I will be dreaming up a way to finish them. I can recommend this dish. I also did a Tomato Bruschetta for starters and suddenly woke up the fact that it is more or less a recipe I have been doing for many years. I make toast, rub it with garlic, add a teaspoon of olive oil and then slices of tomatoes, salt and pepper. Delicious. With a little more fancy (skinned tomatoes chopped plus basil) this was basically what the Bruschetta was. See, I didn’t know, I had been eating Bruschetta for years and just calling it tomato toast. Sometimes I would add a slice of Havarti and broil that until it melted. For dessert, because one of our guests was dieting, I made Vanilla Yoghurt Cheese which I decorated with raspberries and blueberries. I served some cream for those who wanted it.

If you have been with me for a long time, you will know I had a lot of pain and problems with my shoulder and arm last winter, seems to have started up again in the last 48 hours. What fun. Not much to be done, the specialist said there was basically nothing wrong, just have to pump pain pills into one’s system. Your tears will be appreciated, LOL
.
This is the latest recipe from Mushrooms Canada. 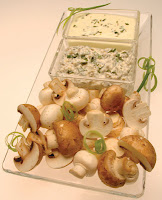