Regretfully, although I am a lot better, I didn’t feel up to bowling yesterday so Matt went on his own. He apparently bowled pretty well for his first time out.

I find it quite funny that Hurricane Isaac is going to ‘interfere’ with the Republican Convention in Florida, just saw a headline which said Isaac was forcing them to be nimble. Isn’t that what politicians do all the time? Beg your pardon, it’s the organisers who are being nimble. The article I read talks about the entertainment at the convention? Entertainment? Why do they need that, surely they are there for political reaso

ns not to make whoopee? Guess I’m wrong again. Reports are saying Isaac will strengthen to Category 2 by the time it hits land – its landfall being more or less where Katrina hit at this time of the year, 7 years ago. Look at this idiot in Florida diving into hurricane waves. People won’t be told. Having lived through a bunch of hurricanes when we were in North Carolina, we make damned sure to be as far as possible from where they are. Or at least to be sure to be in a strong building. Not jumping into waves caused by hurricanes.

giving $12 million to their family. Way to go, would like to be in a position to do that for our family. Isn’t if funny how some people are lucky, apparently a few years ago they won $10,000 with a scratch crossword ticket. You can win $50,00 on those.  Meanwhile, the best we have ever done is $80 and that was years ago.

I have been enjoying some of my free Kindle books recently; considering they were free, there have been some very good stories, some being the first in a trilogy of course, but very often a very good book which is a stand alone. Found a couple of those lately.

I have never cooked spare ribs although I do enjoy them when I get the chance. Mostly I never cooked them because Matt thought they were more like sucking bones until he had some a friend made and he enjoyed those. The one’s in this recipe look delicious, maybe I will try them. I found the recipe on Cooking.com 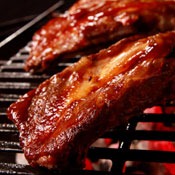 DIRECTIONS
FOR MARINADE: Combine onion, garlic, jelly, honey, soy sauce and vinegar in a large bowl. Stir in the chili sauce and black pepper.
FOR SPARERIBS: Add spareribs and stir well to coat with marinade. Cover the dish and leave overnight in the refrigerator, or for at least 30 minutes so the meat can absorb the flavors.
TO COOK: Remove spareribs from the bowl (reserving marinade). Place ribs in a single layer in a baking dish and bake in oven at 425 degrees for 30 minutes. Pour off the excess fat from the dish. Spoon on the sauce and bake for 1 hour at 375 degrees, turning the ribs occasionally and basting with the sauce. (If necessary, the sauce may be thinned during cooking with a little stock or orange juice.)