Watching good Morning America, apparently Mt. Kilauea is erupting at the moment. It has been live and active for many years, but now is being very violent 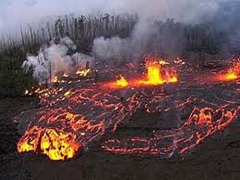 with lava fires all over the place some of them erupting to over 80 ft. There is a wide no fly zone over the area because of the danger of the lava splashes. At the moment there is no anticipated danger to residences, but it sounds as though there could be at any time with small eruptions happening all over the place. The ground under the area is all volatile and could crack open at any moment.

Experiments are being carried out with elephants to see just how intelligent they are. Cooperation is considered a sign of intelligence and in Thailand they are running such experiments. One shown on TV this morning is 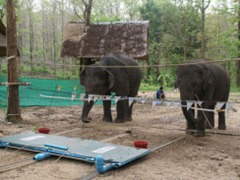 two elephants cooperating by each pulling on a rope at the same time in order to pull buckets of corn towards themselves. If only one elephant pulls, the gadget doesn’t move towards them properly; the corn is in the red buckets which you can just see. Other experiments are being designed. It has already been shown that elephants can paint pictures of themselves and this morning we also saw an elephant taking a self activated shower by waving its trunk in front of an electric sensor button. Quite a contrast to the picture I showed on March 1 with the elephant pushing a tourist vehicle over in a park.

Today is Shrove Tuesday, or in the UK Pancake Day, in the south Mardi Gras. By pancake we mean crêpes. I haven’t indulged in years, but this year I am thinking what the hell? The classic crêpe on Pancake day is served with sugar and lemon with some butter. However, this recipe from Delia Smith caught my eye. I remember making Crêpes Suzettes on one occasion and we ran out of butter and fruit juices and basically ended up with all liqueur for the host and hostess. That being Matt and I we didn’t complain, although, like my dad, I think this sauce should be bottled.