One thing I forgot to mention yesterday, a friend at bowling on Monday told us she had seen lots of American Robins. That, in this part of Ontario, is considered a certain sure sign of spring. The only trouble is, since I wrote that, we have been blanketed with snow. The robins must be freezing, I hope they brought some winter woolies with them. I knew snow was forecast, but certainly didn’t imagine we would get so much. Matt usually goes shopping at 7 a.m., he put it off today as the roads are totally white.

The budget didn’t seem to do a lot and the NDP (kind of like the British Labour party) said they wouldn’t support it, the Liberals said they wouldn’t before it was announced as did the Bloc Québecois which means, I guess, we are definitely headed for an election. I didn’t know the NDP, headed by Jack Layton, were pro increasing supplements for pensioners, I just might vote for them next time, I could use a few more bucks. Then who couldn’t? As it is, there was a sop to the NDP that they would increase supplements to the poorest of pensioners – er, we’re all poor mate. We don’t get the pensions you government people do when you retire. I just saw the figures, the proposal is that a single pensioner, at a low income level, would get a whole $50 a month, whooppee. What the hell good is that supposed to do?

An article I just found today talks about the zoo in Kiev as being a concentration camp for animals. Animals have been dying from malnutrition and neglect since the collapse of the Soviet Union and corruption is suspected as being at the heart of the problem. To read the rest of the article about this horrific animal story, go to http://tinyurl.com/6drgwcz

We tried a new recipe last night, the object of which is not to have too much salt in one’s meal. I didn’t have brown rice so used white. I also used red and white or navy beans (cannellini in the US) not all red. It was very good, I used a little less cayenne as I thought it might be too spicy for us, about 1 tsp. 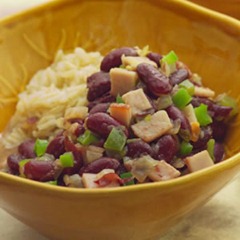 1. Combine 3 1/3 cups water, rice and salt in a large saucepan. Bring to a simmer; reduce heat to low, cover and cook until all the water has been absorbed, about 45 minutes.

2. About 10 minutes before the rice is ready, heat oil in a large skillet over medium-high heat. Add onion and garlic and cook, stirring, until the onion is lightly colored and tender, about 3 minutes.

3. Place 1 cup beans in a small bowl and mash with a fork. Add the mashed and whole beans, the remaining 1 cup water, Canadian bacon, celery, celery leaves, bell pepper and ground chipotle (or cayenne) to the pan. Simmer, stirring occasionally, until the liquid has thickened into a gravy and the vegetables are crisp-tender, about 6 minutes. Serve in shallow bowls, spooned over the rice.

Tips A pot of this classic Cajun comfort dish used to bubble on the back of the stove on wash day. This quick version gets its smoky goodness from super-lean Canadian bacon and a hit of ground chipotle pepper.

Author Notes Note: Chipotle peppers are dried, smoked jalapeno peppers. They are often used to add heat and a smoky flavor to foods. Ground chipotle can be found in the specialty spice section of most supermarkets.