Subsequent to the dreadful earthquake yesterday, there has now been an explosion at the Fukushima nuclear plant this morning. At the moment they say the reactor core is OK but evacuation of a 20 mile

area has taken place and all kinds of conflicting reports are being talked about some of which say radiation levels are rising, others that the levels are falling. It has the potential of being another Chernoble or Three Mile Island disaster. They say things come in threes, first the quake, second the tsunami and Fukushima would be the third. The disaster pictures are pouring out of Japan and the death toll is rising, presently it stands at 900, with many injured and many unaccounted for. The major town nearest the epicentre was Sendai which reporters are only just being able to approach. I just learned this morning that Google has a people finder service which everyone concerned can contact to  leave messages. I wonder how many others know of this Google service. By the way, there have been over 100 aftershocks, I think the number is closer to 150.

People are so damned stupid, I didn’t hear the full report, but the coasts of the States were evacuated as far as possible and yet three guys were on a pier taking pictures of the waves; they got swept away and although two were saved, a third has been drowned. I do understand that there hasn’t been much in the way of damage on the coasts of Hawaii or the US and Russia, but there have been some pretty powerful waves which are still continuing.

Meanwhile the States is suffering from considerable flooding from an excess of rain although this news has been somewhat glossed over due to the reports from Japan. I have no doubt that if your home has been flooded or washed away, the earthquake news is of little interest to you.

By the way, Saturday March 26 is Earth Hour so this is a preliminary reminder to you to turn off you lights and computers, etc. for one hour at 8:30 p.m.

I thought these looked wonderful especially if you happen to have guests for breakfast. They are from a newsletter sent by my local grocery store, Zehrs. There were lots of recipes which I shall be looking into, but this is a start. Obviously some of the ingredients will not be available to all my readers, but I am sure you can find local sources of turkey bacon and Greek yogurt.

This twist on your usual eggs and bacon creates delicious individual breakfast or brunch quiches for your lucky guests. 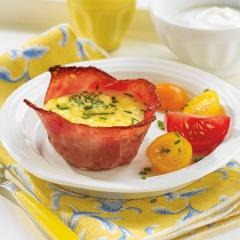