Quake and Tsunami, More of that White Stuff.

I am sitting here watching pictures and reports about the tsunami which is expected to hit Hawaii and the West Coast of the States at any moment. There was a massive earthquake 8.9 in Japan followed by 19 aftershocks some of which were 6.0 which is considered a major quake anyway. There are pictures of a Japanese airport with planes and cars strewn all over the place. Now they are saying one of the reactors may be causing problems because the shut down systems are failing. They are talking “cause for concern”. The waves are about to hit Hawaii as I type. What doesn’t help is that it is still dark. They just talked to a guest in a coastal hotel in Hawaii. The hotel has only cleared the first three or four floors, the people higher than that are still there watching and waiting. The water travelled a mile inland in Japan and swept up cars in parking lots as though they were toys. The Japanese are the most earthquake savvy nation which means a lot of buildings remain safe despite the devastation around them. There are buoys all around the Pacific which enable them to watch the progress of the waters as they cross the area from Japan to the States. The prediction is a 6 ft. wave in Hawaii – at the moment nothing much is happening although the wave is supposed to have arrived.

8.9 is the strongest quake in Japan’s history. Certainly the biggest in the world since the major tsunami in ‘04 which took place in the Indian Ocean. There have been pictures from inside buildings which were shaking like Jello, basically what they are designed to do is sway and sway they apparently did. They have lots of fires including those in refineries. Many caused by gas leaks. There are videos and pictures here http://www.cbc.ca/news/world/story/2011/03/11/japan-quake-tsunami.html?ref=rss Good Morning America has been concentrating on the situation all morning. They probably have great pix too, what they have been showing are incredible and to us unbelievable.

All this devastation in Japan has cause major reactions in the stock markets already - if you had money in shares yesterday, you probably have quite a bit less today.

Meanwhile, back in Canada we have snow in our back yard. Once again it was almost clear yesterday, this morning everything is white with wet snow clinging to the trees. Pretty, but bad driving. Matt has to go to the hospital for a special test, then we have bowling this afternoon. I guess its true that Wiarton Willie (Groundhog’s Day) did not predict the end of winter correctly although I guess he has four more days to be right.

I feel like a comfort food today with all the bad news. This from Cooking.com

Lots of carrots and parsnips give old-favorite chicken noodle soup a sweet savor. To balance this effect, 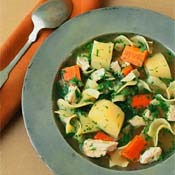 use the optional parsley, which is just slightly bitter.
INGREDIENTS

Meanwhile, stir the noodles into the soup. Simmer until the vegetables are tender and the noodles are done, about 5 minutes. Return the chicken pieces to the pot and then stir in the dill and the parsley.

Variations: *Skip the parsnips and raise the number of carrots to eight. *Add one diced turnip to the mix.
*Use bone-in chicken breasts and cook them for an additional ten minutes. The extra time in the pot will give the soup even more flavor.