This morning on GMA they were talking about a young athlete who scored the winning goal in basketball and then collapsed and died. It turned out he had cardiac arrest and that he had an enlarged heart. Tragic for all the friends and family, my sympathies go out to them. The report then went on to say that there are actually quite a lot of deaths caused this way and athletes should have compete physicals although this would not necessarily pick up the problem of the enlarged heart. In that case, surely, they should have a test to examine whether they have that condition, not just an ordinary physical. The school/college he was playing for already insists on physicals for athletes so it obviously is not enough.

The rebels don’t seem to be doing too well in Libya, my impression is they are untrained fighters up against regular forces and therefore don’t really stand a chance. Moammar Ghadaffi says his people love him anyway, and denies there is any kind of revolution.

Another athletic story in the news, this time of the Brigham Young university student who was kicked off the team because he did not stick to the rules of the honour code which all of them sign. BYU is a Mormon college and their honor code stipulates that students must "be honest, live a chaste and virtuous life…use clean language" and abstain from alcohol, tobacco, tea, coffee and drugs. It also bars gambling, use of pornography and homosexual behavior, though "feelings or attraction" are allowed. In this day and age that seems somewhat incredible, but nevertheless he had agreed to be bound by this code. Sadly the team is now losing because of the loss of their star player.

Last night I watched one of my favourites, How To Train Your Dragon. Matt thinks I am nuts, but there was nothing much on TV so I enjoyed the movie once again. I was just sorry it didn’t get the Oscar.

I talked about my shower yesterday, I used Matt’s and I hated it, it was like standing under a soft spring rain (they put a new shower head on) whereas mine is much more powerful. However, my shower is presently all to pieces awaiting the tiler before they can put the rest of the controls back on. Have you ever tried to figure out what you needed from your bathroom in a hurry? I had to keep going back whilst the plumber was in there. I finally sent Matt in to get my hairdryer, I felt a bit of an idiot!!

Tonight we are going to a friend’s house for dinner, tomorrow I am going to try an adaptation of Carbonnades a la Flamandes which is designed for a slow cooker. If I like it, I will pass on the recipe.

Here’s something a bit different which I got from dLife – an email for people with diabetes.

A quesadilla filled with a variety of vegetables and cheese. 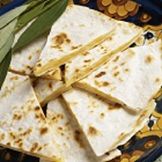 1 In non stick skillet, heat oil over medium. Add spinach, onion, and mushroom. Cook until soft, about 5 minutes. 2 Transfer vegetables to bowl, set aside. 3 Lightly coat same skillet with cooking spray. Return pan to heat. 4 Place tortilla in pan. Place cheese slices on tortilla. 5 Add veggies to bottom half of tortilla and fold top down. 6 Cook on one side until cheese starts to melt and tortilla is golden brown. 7 Flip and cook until cheese is completely melted. 8 Serve with sour cream.