This and That and a No Fly Zone. TV Thursday.

I went on about not eating specific foods on St. Patrick’s Day, but funnily enough, I seriously contemplated having corned beef and cabbage for dinner. Its not a bad meal, if I had had any corned beef handy I might have cooked it. I didn’t however. For those in the UK, we are not talking about the stuff in a tin, but salted beef brisket.

I always thought I had a pretty good knowledge of the English language but came across a word in Matt’s crossword yesterday “oppugn” – to oppose, contradict or call into question. Anyone else ever heard of it before?

The other day I printed up my blog book from July – Dec 2010. Matt has been reading it and he takes great delight in pointing out my typos. Once upon a time he used to read what I wrote before it was published, but for one reason or another, that no longer happens. Guess I should make sure he does read them first and then you wouldn’t have to put up with any mistakes, hopefully. One thing that does puzzle me, most of the pictures come out a regular size, not too big, but my signature when printed from the blog books, becomes comparatively huge, I have no idea why.

I don’t know about where you live, but gas prices are jumping up and down at the pumps here. Barrel prices have been doing much the same, obviously, and will continue to do so until the crisis in the Middle East is settled. The UN have decreed

a ‘no fly’ zone over Libya which will certainly help the rebels and hopefully prevent civilian casualties, however, the UN have granted permission for a lot more interference from the rest of the world so there is no telling what is going to happen. There was a report at home saying that all prices have jumped 4% which is the highest increase for many years, this spirals because people, particularly pensioners, will need more money to live and I don’t see us (pensioners) getting it.

Last night we watched a couple of interesting programmes, one about the Ring of Fire (as it is known) in the Pacific which obviously includes Japan. I had seen this particular programme before but they showed it again because of what has just happened. I had forgotten that Japan is sitting at the conjunction of four tectonic plates and this is why it is so very prone to earthquakes. They virtually predicted this current disaster although they missed out on the nuclear problems.

The second programme (on the Doc Zone)) was about the Irish Potato Famine which I learnt about in history and more or less forgot. I hadn’t a clue about what had happened and how a potato blight had caused millions of Irish people to starve and they were given no help at all, in fact some of the landlords, if not all, were only too happy to get rid of a lot of the peasantry. At least a million died at the time. The story continued to cover the exodus of these starving people in an attempt to start a new life in Canada. Life on board ship was appalling and one particular ship ran aground on ice off the Newfoundland coast. The Captain skipped with his crew in the lifeboat having nailed down the hatches which, luckily, one or two of the other crew men ripped off again. Although many were lost, particularly children, quite a number were eventually rescued by another ship. Unfortunately the captain was never caught and punished for his crimes. A lot of this was the fault of the British so we should hang our heads in shame.

I had never eaten raw spinach until I came to Canada, I don’t know if people eat it in the UK today, probably, it is 35 odd years ago. Anyway, I learnt to like it very quickly and when I saw this recipe from Eating Well, I thought good, a new salad for me. I never know what you are supposed to do with the yolks in many of these recipes. I think I would just add 4 complete hard boiled eggs, although I suppose the salad may be healthier with only one yolk apiece. Seems a waste to throw out 6 yolks, don’t you think?

Like many spinach salads, this one features lots of 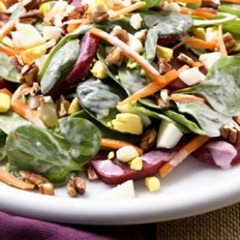 chopped-up hard-boiled egg. But since most of the calories in an egg are in the yolk, we use just two whole eggs, plus the whites from six additional eggs. The result is a rich, eggy, satisfying spinach salad that keeps the calories in check.

2 servings, about 4 cups each