In French Marilyn’s blog yesterday, she was writing about the dirtiness of Paris. It is, or was, just as dirty in London and many European cities although the Germanic nations tend to be much cleaner. It was one of the things that impressed us so much when we came to Canada, it is so clean. I don’t use sidewalks a lot any more, but I have never seen a canine deposit on any one of them, people are very good about carrying a plastic bag with them and removing what Fido left behind. However, I do notice that there seems to be more litter these days than when we first came here, whether because people are uncaring or because cities or property owners are not prepared to spend so much money cleaning up, I don’t know. In some cases it a case of “not my responsibility” too. In the Carolinas they used to have a drive every year to pick up litter on the 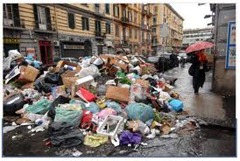 beaches (there are bins all over the place mind you) and what they hauled in was incredible. The local aquariums have displays in an attempt to show people how dangerous this is for wildlife. Following this theme, I decided to look for a picture, there are some incredible pictures of trash covered streets, thankfully not in the west however. I cannot imagine living somewhere so filthy.

Woohoo, I have been having trouble with my shower and the super has just arrived to install a new shower and do some tiling. I won’t be able to use my shower until the tiling has been done which will be some time next week. Matt is graciously allowing me to use his shower – ha ha.

On Good Morning America they are already talking about Mother’s Day which in this part of the world is not until May, I think its this month in the UK. They award ‘breakfast in bed’ to a deserving mother – they even take a bed for her. People have to write in and tell the programme why their mother should win this treat, they then descend on her as a surprise. Emeril Lagasse prepares the breakfast for her and she is feted – usually with a large crowd in attendance. Of course when they mentioned Mother’s Day I pricked up my ears and thought “Asparagus Season”. 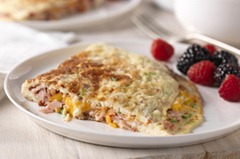 HEAT 10-inch nonstick skillet sprayed with cooking spray on medium heat. Add egg mixture; cook 4 min. or until almost set, occasionally lifting edge with spatula and tilting pan to allow uncooked portion to flow underneath. Top with ham and cheese; cook 2 to 3 min. or until egg mixture is set and cheese is melted.

SLIP spatula underneath omelet, tip skillet to loosen and gently fold omelet in half. Cut in half.