I’m late today. I have been fighting a bronchial 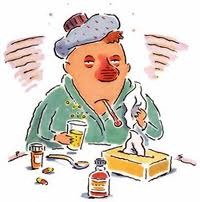 condition for the last 24 hours and feel like you know what!! I am also very sorry for myself, I couldn’t lie down for long last night and ended up sleeping in an armchair which is not conducive to being rested and relaxed. I haven’t actually had bronchitis since I quit smoking some 16 or more years ago. It was an instant benefit to quitting the weed. I am taking one of Buckley’s cough mixtures and the ad goes “it tastes awful but it works” not sure about the latter half of that claim, but the first part is right. What really annoys me, I have been boasting for years that I don’t get colds, this is the second bout this winter. Grrrrrrr.

Today the Canadian government vote on the budget and the prediction is that it will fail and the government fall. That means a spring election. At least we don’t go on for ever like the Americans do, I really don’t understand why they have to campaign for so the best part of a year. Both in Britain and Canada an election is over and done with in a matter of weeks. In fact Canada is in a pretty good state at the moment and it is predicted that our national debt will be reduced to virtually 0 by 2015. However, all the other parties want their crack at the whip. Elections cost a lot of money and I don’t think the man in the street wants one yet, but I guess we don’t get a lot of say in the matter.

One thing I forgot to mention, the two large earthquakes in Burma (Myanmar) yesterday. The reports this morning say 75 dead and 111 injured. This doesn't seem to have impacted the local news so I haven't read a lot about it yet.

Here’s something a bit different today. It is from WebMD which is an email I get regularly with all kinds of health tips, including diabetic news. I don’t know how easy it is for you to obtain clams, in Ontario we pay a small fortune, in North Carolina we used to walk into the water and rake them up. I used to pig out on them when we lived there and miss their easy availability.

By The Nourished Kitchen WebMD Recipe from Foodily.com

Miso soup with clams is one of those special foods – 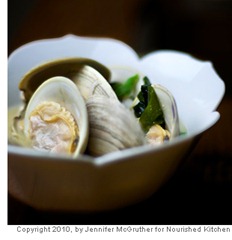 simple and quiet and humble, but also elegant in its simplicity. Sometimes the best dishes are the simplest. In our home, broths and stocks form the foundation of many of our meals, and with good reason. In the summertime, when the days are long and hot and standing over a boiling stockpot seems otherwise unappealing, we make the effort to eat broth daily or every other day, but in winter when drifts of snow can climb as high as second-story windows, we make the effort to drink broth with every meal whether in soup or stew, as a liquid for braising vegetables, in reduction sauces and gravies, or even on its own. This soup, simple ingredients dressed in a fine Japanese-style fish and seaweed broth, is a simple incarnation of the many ways we love to enjoy and celebrate the nutritive value of a good broth.

Set the dried wakame in a boil and pour enough filtered cold water over the seaweed to cover it by about a half inch. Allow the wakame to sit in the cold water for about ten minutes.

Meanwhile, boil or steam the fresh clams until they open. As they open, move them to serving bowls. Discard any clams that do not open.

After the wakame has soaked for ten minutes, rinse and drain it.

Heat the dashi or fish stock until barely simmering and add the wakame. Slowly simmer the wakame in the broth for about two to three minutes.

Remove the wakame and broth from the heat, allowing it to cool for about five minutes before whisking one-quarter cup white miso paste into the broth until it’s fully and completely dissolved.

Pour the broth over the clams, garnishing with sliced thinly sliced scallions.