I was reading some tips the other day about food preparation and doing things to save time later which reminded me of a tip I wanted to pass on. I recently pe 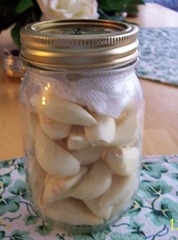 eled and prepared three bulbs of garlic and meant to mention it. Once upon a time I used to buy huge jars of peeled garlic cloves from Sam’s (a warehouse store) but they stopped selling them, I then decided to start doing smaller jars myself. I store the cloves in a Mason jar with some paper towel on top to absorb the moisture and that way I have fresh garlic ready to use whenever I want. It lasts for months stored in the refrigerator.

Saturday we watched the 25th anniversary concert of Les Misérables on TV. It was great even though the Public TV channel was fund raising. I think I might well send for a copy from PBS as I wouldn’t mind having it in my library. Mind you, it makes me cry my eyes out most of the time. Stupid isn’t it? We have had cassettes of the show for years, given to us by friends and often play them when we are driving long distances. I cry then, but not quite as much, I guess I don’t get quite as involved.

The news out of Japan is most disturbing, I am writing this on Sunday night (doc’s appointment in the morning) and there has been a second explosion at Fukushima not to mention the worries about the other damaged nuclear stations. As well they evacuated everyone. There was mention of people being given pills to ward off cancer? Something I have certainly never heard of, of course the Japanese should know a lot about radiation and cancer after Hiroshima and Nagasaki.

A friend sent a recipe for biscuits today which sounded pretty good and pretty easy. To the English biscuits are cookies, to the North Americans they are more like scones. I just might have a go at these myself – I used to make scones but haven’t done so in years.

SUBMITTED BY: GEORGIEBRENT PHOTO BY: BEAN42069

"This is a simple but tasty biscuit recipe. You don't taste the mayo, but it gives the biscuits a light and fluffy texture. For rolled and cut biscuits, use just enough milk to hold it together."

Yum! These biscuits come out very light and fluffy with a rich (but not too rich) taste and mouthfeel. If you don't have self-rising flour (like me), use 2 cups less 4 tsp. sifted flour, 3 tsp. baking powder, and 1 tsp. salt.