That’s got to be the end of an era, Elizabeth Taylor died yesterday, she was only 79 which, at my end of the spectrum, is not very old,

especially these days, with more and more people clocking in at 100. Heard about someone at 119, her grandson was almost as old as I am. Obviously the news will be full of obituaries, she had more husbands than Henry VIII had wives, 8. Of course she married Burton twice, don’t know if that counts. She was described as one of the greatest stars, not sure about that, certainly she made the news a lot but I never thought a lot of her acting ability; she was such a beauty I guess nobody cared. A friend cited Virginia Wolff as an example of her acting ability, I never saw it, so I cannot express an opinion. This morning on TV Barbara Walters said she was a great actress too!! She also said she told very raunchy jokes too, nothing you could tell on morning TV.

I was given a tip today which I am now trying out. Apparently to keep bananas fresh, put them in a clear plastic bag. Don’t put them in the fridge. I will see what happens.

I just had the cable guy in (no not the comedian unfortunately) because when you phone us and we are out, our answering machine sounds like a fax which a high pitched wailing noise. They checked our lines and there was a slight problem, but had to send someone in to check, but he said he couldn’t find anything wrong, amongst his continual chatter, I think I know his life history now. So, looks like a new machine. He suggested I get one through my ISP who is also my phone provider, but I think I’ll go with a machine.

Yesterday I pre-ordered the third book in Glenda Larke’s Watergivers Trilogy, its called Stormlord Exile. It isn’t available til end of July/beginning of August, but thought I would get it ordered anyway. I can’t wait to read it and finish the series. Right now I am working my way through the Wheel of Time series by Robert Jordan as this series has been going so long I find I have forgotten a lot of what happened at the beginning. Right now I am on book three, The Dragon Reborn and I have the next book, The Shadow Rising, already. It is interesting just how much I had forgotten - I am also enjoying them very much.

I found this recipe in a booklet which came with Food and Drink and is basically an ad for Sobey’s products. This salad appealed to me, I need one for dinner guests and I thought, without the ricotta, this would be perfect. I will make it properly at another time. 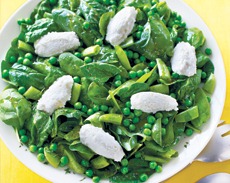 1. In a small bowl, use a fork to blend olive oil, lemon juice, honey, salt and pepper until smooth.

2. Place spinach in a large salad bowl. Add both kinds of peas, the mint and lemon juice mixture. Toss well.

3. Use two spoons to shape ricotta into 6 to 8 football-shaped ovals and place them on top of the salad. Serve immediately.

Author Notes This lovely salad is topped with light ricotta and two types of peas. Mint adds an extra hint of fresh flavour.