We knew the Physiotherapist was coming at 9:30  so got up and got dressed to receive her. She arrived, but only at 9:45. I thought her name was Stephanie but it's Bethany. Apparently lots of people make that mistake. She is ordering Matt a transfer bench for the bath and a rail to get out of bed (not sure how that works). Whilst she was here, I got a phone call from the grocery store about my order and substitutions, then a phone call from CSC about my shopping trip later. Then something else, forget what. Bethany emphasised to Matt - when he stops walking put the brakes on, on the walker. I hope it sank in but I bet he still doesn't do so all the time.

So, then I was taken down to the store to collect my groceries and when we came back she said she couldn't drive up to the back door because the garbage cans were in the way. I would have driven it personally, however, not my vehicle, I wasn't driving. However, this meant I had to walk what, to me, is quite a fair distance to get to the back door. By which time my legs were screaming at me. Got upstairs and then, of course, had to put the stuff away. Did it in dribs and drabs. Had to make lunch for himself as well as myself. Whilst we were clearing up from that, someone called, thought it was Medicas (equipment) but turned out to be Para Med who are one of the contractors for PSWs, etc.(Personal Service Workers). I had no idea she was coming. Turns out we get a PSW for Matt tomorrow. This was totally unexpected with the result that I am now totally worn out. At least sitting here typing is fairly restful.

I then realised that if the PSW comes tomorrow morning I have a coffee meeting with the ALZ bunch, well a couple of them, so I won't be here to let him/her in. Phoned the Para Med number, no reply, left a message. Not sure whether to run under a bus after all this or not. We eventually got a call from the PSW who will be in the building tomorrow afternoon and is coming to see Matt at 4 ish, with a view to helping him shower. How ridiculous. I can't get through to them that he does NOT need help with showering at the moment. He certainly will not want to strip and take a shower at that time of the day. When he gets the transfer bench, he will have no problems getting into the bath in order to shower. When the PSW comes tomorrow, we will, hopefully, talk about it.

Just watched the first episode of Jeopardy's Greatest of All Time tournament with the three millionaires. Thoroughly enjoyed it. Mustn't say anything as ladydog recorded it and doesn't want spoilers. I wasn't quite sure how the tournament would work, but after watching tonight I have the hang of it. Two tournaments a night with one winner emerging. Any winner who wins three tournaments will be the finalist. I personally am rooting for James Holzhauer. Matt is too.

This is what I made for supper tonight. There is a video from Six Sisters showing you how to make it, but this is the recipe. It was delicious although Matt was grousing from start to finish about how hot it was. He really is a wuss about hot food. But, as he kept saying, it was delicious. This recipe is for a 6 qt pot, if, like me, you have a 3 qt. just half the recipe. Works fine. 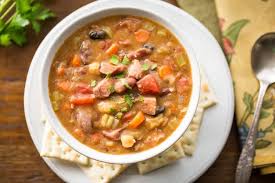 1. Add all ingredients to the Instant Pot.

2. Put the lid on the pot, making sure the valve is set to SEALING.

3. Press the MANUAL button, set to high pressure, and set the time for 45 minutes.

4. When the cooking cycle is complete, allow the pressure to naturally release for 20 minutes, then quick release any remaining pressure by carefully moving the valve to VENTING.

5. Season with more salt and pepper if desired.

6. Mash some of the beans to make it thicker.