The social worker, Margaret, came this morning and was a very nice woman. Her family had lived in Newcastle in the UK for a number of years. Her son was born there which makes him a Geordie. Just as well he wasn't brought up there or nobody would be able to understand him. Most of the British cannot understand them. My first husband said he worked with a Geordie for two years and still didn't know what he was talking about. Matt's dad was from that area where they too have a strong regional accent. He had lived down south long enough to lose it in every day speech but could put it on when he wanted to fool you. Margaret herself is, I assume, from the Caribbean Islands, I forgot to ask her. Her knowledge of English was perfect, unfortunately her pronunciation was not. Anyway, after chatting for an hour, it basically seems we slip through the cracks. If Matt needed help with showering, we could get someone in who would also help me with things I need, but he doesn't so we are out of luck. However, when she left, she took my recycling bags down for me and then brought the bags back before she left. Really nice of her. She is coming back again in two weeks.

Seems like we are getting that snow storm tomorrow morning with up to 15 cm (almost 6 inches) of snow likely. Quite a bit for this area.

For supper I had some Butter Chicken Sauce left over, so I sauteed some shrimp and snow peas and then poured in the warm sauce. Served over rice, delicious. If you haven't got an Instant Pot yet, you should get one, if only for the Butter Chicken recipe.

I never knew Egg Drop Soup was this easy. 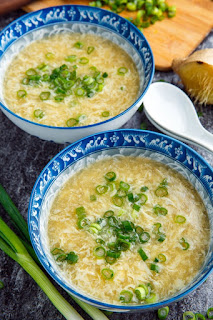 1. Bring the broth, the whites of the green onions, ginger, peppercorns, bacon, and mushroom to a boil, reduce the heat and simmer, covered, for 30 minutes, before straining out the solids and seasoning with salt to taste.

2. Mix the cornstarch and water mixture into the simmering broth until it thickens, about a minute.

3. Swirl the broth in the pot and while it is still swirling, pour a thin stream of the eggs into the broth until it has all been added.

4. Remove from heat, add the sesame oil, the greens of the green onions, and the mushrooms and enjoy!

Tip: Do step one the day before to save time when serving it.