I am gobsmacked, I have an appointment for Matt to have an ultrasound at 7:30 a.m., I normally get up somewhere between 7 and 8, I am not usually running around town at that time. Horrors. Luckily it isn't far away, but, just the same, 7:30. Shudder. It's not til the 22nd either. Guess they must be extremely busy.

Matt decided he definitely didn't want to go out to lunch, so I made his and then went to Mandarin to meet our friends on my own. It's Chinese New Year's so I stuffed myself on dumplings which I came to regret. Enjoyed my lunch though and it was good to see our friends. Boy was the place crowded though. They had trouble keeping the food going, every time we went out there were empty dishes. Not that we really went short of anything.

Got home and eventually ladydog arrived. She was there as kind of support when the Care Coordinator from LHIN came to see us. Her primary job was to do an assessment on Matt. I thought that had been done before, but I suppose it hadn't. Boy did it ever take a long time. We also asked her about getting a doctor in  the town where I live instead of about 40 minutes away. Nothing wrong with our current doctor except distance. ladydog also brought up the topic of Long Term Care homes etc. plus we also discussed what would/could happen it I go in for a hip replacement. I now have a sheaf of literature to read and lots of time to do it in. I suppose I could stop writing this blog and learning my Spanish!!! Anyway, the young lady left about 4:15 and ladydog left shortly after.

Before they left I had developed a chest pain which I initially assumed to be indigestion (see Mandarin and dumplings) I took a pill but nothing seemed to happen so I ended up taking my blood pressure which was pretty high. To be on the safe side, I called the ambulance. Think those guys had better move in here with the pair of us. The took a picture of my heart and my BP several times (forgot I had been told to chew aspirin). Whilst they were doing all this the pain did ease slightly and they said they didn't think I was having a heart attack but without my having blood tests they couldn't give me a definitive answer. Anyway, decided not to go in to hospital and apologised to them. They said better I called them than the alternative. They had a  learner with them too. She was doing pretty well. I told them I was now going to have a drink and they said, good thing, thin the blood down a bit LOL.

So, had a drink and reheated the Butter Chicken from last night. We then sat down, latish, to watch TV and of course Jeopardy G.O.A.T. It was actually pretty funny. However, I checked the Guide and was disappointed to see that it didn't continue tomorrow or even later so knew Ken Jennings was going to win. In a way I was disappointed as I wanted James Holzhauer to win, but as Alex pointed out it wouldn't make any difference to their status, Brad had won the most money ever on Jeopardy, Ken had won the most regular games, 74, and James had broken lots of Jeopardy records. However, I was sorry for Brad in that he didn't do too well at all. Mind you he still won $250,000. So, boo hoo, it's all over. The camaraderie between them was fun to watch, especially between James and Ken.

You couldn't have a much simpler recipe than this. And yes, I do have gochujang.

If gochujang hasn’t made it to your pantry yet, this stew recipe would also work with virtually any 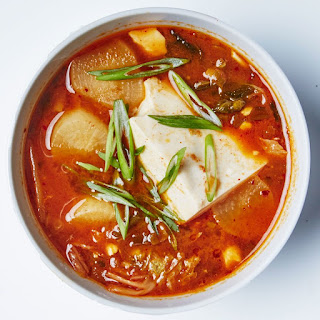 1. Heat oil in a large saucepan over high. Cook white and pale-green parts of scallions, garlic, and ginger, stirring often, until softened and fragrant, about 3 minutes. Add broth, then whisk in gochujang and soy sauce. Add daikon and gently simmer until daikon is tender, 15–20 minutes.

2. Add kimchi and tofu. Simmer until tofu is heated through. Carefully divide among bowls. Thinly slice reserved scallion tops and scatter over.