Missed bowling again today, not sure Matt would have been up to it, but I didn't get to sleep til around 3 a.m. and was both tired and aching (back in particular) just didn't feel like going. Will try and go this week some time. I could have gone to exercise classes but the same applied.

So, basically a quiet day. I spent a lot of it reading and napping.

This evening I chose Charlotte's Web for us to watch, I had seen it before. Matt commented several times that it was a great movie for kids, but he didn't turn away from it and enjoyed it I am pleased to say. I certainly enjoyed it again. I had forgotten the little girl and only remembered the animals and spiders. Always sad when Charlotte dies. But a lovely film, nevertheless. I guess that's a spoiler but figure most people have seen it.  I must admit I am enjoying these TV channels but have no intention of paying for them when our freebies are up.

I just ordered the old man another sweat shirt which he can have for his birthday next month. I hope this one is a looser fit than the last one I bought. It is OK when he is wearing it, but very difficult to take off again. Takes two of us. I suggested we gave it away but he wouldn't hear of it.

I thought this looked an interesting recipe but I must admit I have never heard of American Paddlefish Caviar. If one can't afford caviar we always subbed with lumpfish roe, but paddlefish??? Will have to google that. Seems to be a fairly primitive fish which is also an ancient fossil. 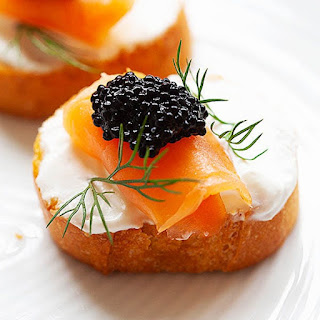 Italian bread and assemble with Crostini toppings for the best appetizers

Make the Crostini Toasts. Mix the olive oil with salt and ground black pepper. Brush the olive oil mixture on one side of the toast. Arrange the baguette slices on two large rimmed baking sheets.

Bake, rotating sheets halfway through, until lightly toasted, 10 minutes. Let cool on baking sheets. You may make Crostini bread one day in advance. Keep in the plastic bag for storing.

Crostini Toppings: Combine the sour cream, lemon juice and salt together. Stir to mix well. Spread the sour cream on each piece of the toast. Top with sliced smoked salmon, caviar and garnish with dill. Serve immediately.