We have just watched the newest version of The Lion King, I was absolutely delighted with it. It was so clever. It looked like the real animals acting their parts - I thought it was brilliant. Been wanting to see it for a while and now I have. Way to go Disney, OK, it's an old film re-vamped but, in my opinion, with great success.

I went bowling all on my own today. Matt insists he doesn't need a "babysitter" so I left him alone. He was fine but then as ladydog says, he's fine on his own until he isn't. He has an ultrasound for Wednesday so hopefully with that we will be able to find out what's wrong with his leg(s). Fingers Crossed please. As it turned out, I was the only one on our team today so I joined another couple who were the only two on their team (teams are usually 4, occasionally 5). Bearing in mind that I haven't bowled for 4 weeks, I did pretty well, 156, 172, and then a somewhat lousy 110. It was nice talking to everyone. The woman I was bowling with was from Limey Land too so we have a lot in common. One bowler came up to me and said how much she had been enjoying this blog. Thanks, appreciate it.

After bowling I went and bought the liquor store, I was going to go to Victoria St. Market and get some bananas, but I will be getting my shopping tomorrow so didn't risk more expense. You know what happens when I go there!! Their frozen coconut shrimp have been calling me for a day or two.

I thought this sounded delicious. Guess I need a few more mushrooms. Bet you could do this in the air fryer.

Instead of cooking mushrooms in a skillet, chef Geoffrey Zakarian roasts them in the oven until 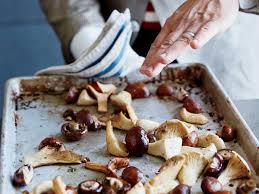 tender before tossing them in a buttery red wine sauce with garlic and fresh herbs.

1. Position racks in the upper and lower thirds of the oven and preheat to 400°. Heat 2 large rimmed baking sheets in the oven for at least 10 minutes.

2. In a large bowl, toss the mushrooms with 3/4 cup of the oil, the thyme and rosemary. Remove the baking sheets from the oven and immediately spread the mushrooms on them in an even layer. Roast for 25 to 30 minutes, until tender and browned, stirring halfway through roasting.

3. Meanwhile, in a medium skillet, heat the remaining 1 tablespoon of oil. Add the shallot and garlic and cook over moderately high heat, stirring, until softened, about 3 minutes.

4. Add the wine and simmer until reduced to a glaze, 3 to 5 minutes. Swirl in the butter and season with salt and pepper.

5. Scrape all the mushrooms onto 1 baking sheet. Add the red wine butter and toss well. Season with salt and pepper and toss again. Transfer to a bowl, top with the tarragon and parsley and serve.

Tips
The roasted mushrooms and red wine butter can be refrigerated separately overnight. Reheat the mushrooms gently before tossing and top with the herbs just before serving.