The fates have got it in for me, or maybe it's Mercury Retrograde, never thought of that. Tuesday morning I wanted to access my grocery order and couldn't get into their website. I needed to add a couple of items and then post it for Wednesday morning. I phoned their IT department who said they thought it was an internet problem, phoned my ISP and they couldn't find anything wrong so I went back to the store IT having tried two more browsers (I have Chrome) that is Internet Explorer and Edge. I later tried it on my tablet which used Silk, and  none of them could get into the website. In the end they posted my order for me and said they would send the problem to their technical department and so forth and so on. I then decided to delete Internet Explorer but need special permissions to do so, on my own computer if you please, and although I followed instructions, couldn't seem to change the permissions. For now I have given up and decided to moan about it all here. It really isn't  my day.

Well, I shouldn't say that. Went to see the urologist. Forgotten, got the car and then needed to go to the bathroom really badly. Had to dash up to our apartment. This then made me late for my apartment, so I was harassed once again! Not to mention that my legs were on fire. However, I was careful to drive properly and not put my foot down. Also I discovered my cell phone was almost out of battery. Gotot to the doctor, had a urine test and everything was alright - have to see him in a year. In fact I will see him in a couple of weeks, but for Matt, not me.

It must be Mercury Retrograde. Just remembered I had an email from ladydog this morning and she says she has snapped something in her knee at the gym and it hurts, I bet it does. Nope, just checked, Mercury Retrograde isn't until Feb 17. So if it's this bad now what on earth will happen then.

Today, David Gascoigne in his blog Travels with Birds talked about Snow Buntings. I had never seen a Snow Bunting, but it reminded me of long ago a friend of my parents had a boat named Snow Bunting. She was the bearer of a plaque stating she had been one of the many little private boats which had set sail to Dunkirk to help rescue the beleaguered troops on the beach there. A memorable memoriam to a cute little bird. What, I wonder, was an English boat doing being called by the name of a North American bird. Odd how these things happen. Had to have been a pretty old boat because Dunkirk was in the early days of World War II. The plaque went to the boat, not to the people who sailed her. I wonder if the owners got any recognition at all.

My grocery store web site is still not up. I hope I have everything covered that I need. If I think of anything I will have to phone them early in the morning.

I'm a sucker for any shrimp dish and this one sounds really good. However, I would have to peel the shrimp as Matt would never be bothered - even in his better days. One could perhaps wrap them in cheese cloth to get the flavour in the oil although I once tried boiling shrimp shells and didn't think the liquid tasted of much at all.

In Peru, small streams wend their way from the mountains to the coast, and the delicious shrimp that 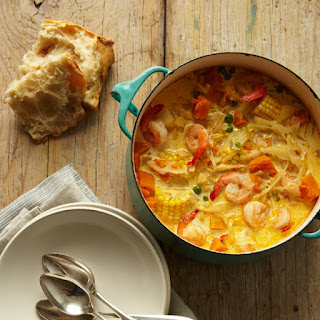 fill them are cooked with local corn, squash, and potatoes to make this South American chowder called cupe. Don't peel the shrimp before cooking them in Step 1: The shells will flavor the cooking oil, which in turn will flavor the soup. the corn is traditionally left on the cob, but if the prospect of eating it this way (it is messy) bothers you, use two cups of kernels instead

1. In a large pot, heat the oil over moderate heat. Add the shrimp and 1 teaspoon of the salt and cook, stirring frequently, until the shrimp are pink and firm, about 5 minutes. Remove with a slotted spoon. When the shrimp are cool enough to handle, peel them and set aside.

2. Add the onion, cayenne, paprika, cumin, and another teaspoon of the salt to the pot. Cook, stirring occasionally, until the onion is translucent, about 5 minutes. Add the Tabasco, squash, cabbage, potatoes, corn, and water to the pot. Cover and bring to a boil. Reduce the heat and simmer, partially covered, until the potatoes are tender, about 15 minutes.

3. Add the cream and simmer for 10 minutes. Stir in the peeled shrimp, the remaining teaspoon of salt, and the peas, if using. Cook until the shrimp are just heated through, about 2 minutes.