I was just reading Elephant's Child's blog Sunday Selections - She lives really close to the dreadful fires raging across New South Wales and today printed the story of a Zoo and a link to how the animal handlers saved the animals. The situation in NSW is dire with thousands of animals having been killed and a number of humans also. As Sue points out, even the surviving animals will have big problems finding food and water and also shelter after all their habitat has been razed to the ground. The air quality for miles around is unbreathable and people are advised to stay inside, but smoke can get through closed doors. Koalas are often shown being rescued, but there are many other less cuddly animals which are affected too. It is a world shattering disaster. 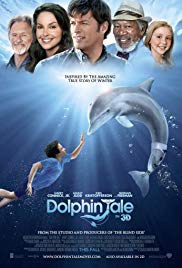 At the moment we have access to various movie channels and tonight, on Starz, we watched Dolphin Tale. I had heard the story of the dolphin who lost her tale and received a prosthetic which is what this movie was based on. It was a lovely movie and Winter, the dolphin, played her part beautifully. It was a pretty well known cast and we thoroughly enjoyed it. Wasn't sure whether Matt would but he definitely enjoyed it too. I thought he might as he has always loved dolphins and whales. Morgan Freeman's character kept calling Winter a fish and nobody corrected him. Annoyed me somewhat as Matt was doing the same thing. Maybe he was annoying me or maybe he had forgotten. It is a wonderful example of what can be done with prosthetics and they are developing new things all the time.

By the way, I keep making typing mistakes tonight. If I don't catch them all, my apologies. Dunno what's the  matter with my fingers or is it my brain (always assuming I have one). That reminds me, I was a tad annoyed with my Spanish lessons tonight. Usually it accepts English spelling and several times it has done so but had the cheek, in one section, to penalise me for a word I had used elsewhere dozens of times. Of course I still use mainly English spelling and Blogger doesn't like that either. Tough cookies.

Bowling Monday but whether Matt can or will, I have no idea. Both his legs are hurting now. He has a physiotherapist coming Tuesday to assess him. Will be interesting to see what she says.

Like Stuffed Peppers? Well Kevin Lynch has come up with an easier version. Although, in fact, stuffed peppers in the Instant Pot is as easy as pie. You know, that's a stupid expression, I find making pies very difficult. Never been much good at pastry. It's pre-made pie shells for me these days.

All of the flavours of stuffed peppers in the form of a (much easier to make) hearty, and tasty soup 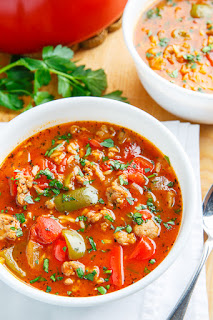 with Italian sausage for even more flavour!

1. Bring the rice ad water to a boil, reduce the heat, cover and simmer until the water has been absorbed, about 20 minutes, before removing from the heat and letting sit, covered.

2. Meanwhile, cook the sausage in a large pan over medium-high heat and set aside, about 7-10 minutes.

3. Add the oil and onions to the pan and cook for 5 minutes.

4. Add the peppers to the pan and cook for 5 minutes.

5. Add the garlic and cook until fragrant, while stirring, about 1 minute.

6. Add the tomatoes, tomato sauce, broth, basil, oregano, sausage, onions and peppers, bring to a boil and simmer for 10 minutes.

7. Add the rice, season with salt and pepper, remove from heat, mix in the parsley and enjoy!

Option: For One-Pot: Make this a one-pot meal by adding the uncooked rice to the soup in step 5 with an extra 2 cups broth and cook until cooked, about 20 minutes.

Option: (Highly recommended) Add 1/2 cup grated parmesan to the soup and let it melt in! Yum!

Option: Replace the rice with quinoa or a blend of whole grains!

Option: Instead of cooking the rice separately, add it and 2 cups up extra broth to the soup at step 6 and simmer unto the rice is cooked, about 20 minutes.