Went down to the grocery store's Starbucks this morning and had my gold plated coffee (you mean it isn't? but why do they charge so much?) two of the group managed to make it. Both the guys, neither of the gals. I hadn't realised one of the guys was an Englishman. He has been here a long time and I can't tell from his accent. Mind you I can't tell these days anyway. All the accents blend into one nowadays unless it is a very broad accent from somewhere like Newfoundland or the more rural parts of North Carolina. In NC we once played golf in company with two friends and a fifth guy who joined us and was known as the Major. I didn't understand a word he said for the whole 5 hours and basically just nodded and smiled, as I tell people, he could have told me his wife had died that morning and I would still have nodded and smiled. Our two American friends, who were from the Detroit area, seemed to understand some of what he said.

Came home and prepared lunch and then realised I was running late so left half mine and went down to the exercise class. Not having seen our leader since before Christmas, I told her the chicken and egg joke and she cracked up too. I also took down some of the small brown seeds from my lunchtime bun (wrapped in a tissue). One of the class had asked me what bed bugs looked like so I showed him. Everyone else had a look too. I once mistook one of these seeds during the time we had the bed bug problem and tried to squish it. Couldn't figure what it was doing in the kitchen anyway, duuh.

Finished my lunch, sat down in my chair and nodded off. Phone went about 3:30 it was the Personal Service Worker. When she came up, we explained to her that Matt did not need help showering but that I needed help with heavy stuff in the household. She said she would talk to her supervisor about it all.

I am almost wishing to be bored to death Thursday, but I am expecting the equipment for Matt and I was hoping we could go bowling in the afternoon. Friday the Occupational Therapist is coming to see everything is installed properly.and then Zoey is coming to see Matt. I believe she has invited ladydog to come with her.

Of course we watched the Jeopardy G.O.A.T. again tonight. My favourite won. However, I am  rooting for Brad Rutter to win at least one game, he isn't doing too well so far.

I would love to cook this recipe but unfortunately himself does not like bones. I, on the other hand, love bones to chew on.

The cooking liquid is so delicious that I didn’t want any to go to waste. I skimmed off the fat (trust 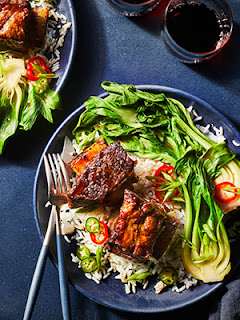 me, it would be too greasy on the palate if you didn’t do this) and reduced it slightly, then steamed some bok choy over it to make a more complete meal. Plated with a little rice, the ribs and bok choy—along with that luscious cooking liquid—made for a meal the kids immediately asked me to put in regular rotation. And since it takes less time thanks to the Instant Pot, that’s a request I can easily (and happily!) accommodate.

3. Strain cooking liquid through a sieve into a 2-cup glass measuring cup. Discard solids. Skim off and discard most of liquid fat from top. Program cooker to SAUTÉ, and add cooking liquid. Cook until reduced to about 1 cup, about 5 minutes. Press CANCEL on cooker.