Yesterday I forgot to mention that the supercomputer Watson beat out its two human competitors, then I got a link on Facebook from a friend, 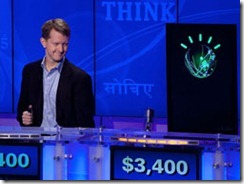 to an article written by Ken Jennings who was one of the two humans. Good article and worth reading I thought. http://tinyurl.com/4oe46r9 He implies (tongue in cheek) that Jeopardy contestants may be the first ‘jobs’ to disappear due to Watson, but I think it will always be more fun to watch humans pit their wits against one another although I was absolutely fascinated to watch Watson’s performance. Having been a reader of sci fi for many years, I can’t help wishing that one of my favourite authors, Isaac Asimov, was alive to see Watson. So many of the things he wrote about long ago are beginning to come true and I think Watson is the forerunner of a lot more of his ideas. Of course many other sci fi authors have written about artificial intelligence systems since, one of my favourites being Anne McCaffery’s AIVAS in her Dragonriders of Pern books. With Watson, I was impressed by some of the ‘humanness’ added to its programme. It didn’t just give an answer, it said things like “lets try….” and “same category” or “lets finish the category” same as a human competitor would. I have just had to go back and change what I wrote, I was referring to Watson as he, *g*. Last night Alex Trebek commented that it was nice to be able to talk to all three contestants instead of only two the previous nights.

It sounds like the middle east unrest begun in Egypt is spreading, much as was feared by the governments in this part of the world. Yesterday people were killed in an attack by the Bahraini military – the Bahrainis are calling for their king to step down – I guess they want to be a republic. I am not a ‘political animal’ so I don’t pretend to understand a lot of this unrest, but I know I was impressed the Egyptian military would not fire on its people although the Bahraini military did so. Political unrest is always a scary matter though, it spreads like wildfire.

I just read a report stating the military are going to get extra medical attention from Canada’s government. Millions of dollars are being set aside to treat current and former Canadian Forces personnel. In this country with our medical system I wonder if that is really necessary. In the States they have veterans hospitals but in the US they don’t have a state funded medical system.

I always enjoy Coconut Shrimp when I get the chance in a restaurant, The Outback are one of the places which serve them. This is Kraft’s version of the popular dish. DIP shrimp, 1 at a time, in egg, then in coconut mixture, turning to completely coat both sides of each shrimp with egg before coating with coconut mixture; place on baking sheet sprayed with cooking spray. Press coating mixture firmly onto shrimp to secure.

For best results, make sure each shrimp is well coated with the egg mixture before dipping in coating mixture.

How to Toast Coconut