Yesterday, I mentioned that our Travel League was taking place on Thursday, we will be bowling “just along the road” from us at Towne Bowl and we are meeting at The Crock and Block on King Street. We have never been there although the restaurant has been in existence forever. I decided to look them up and found their lunch menu here http://tinyurl.com/4tba7gn which doesn’t look too bad. I also found some criticisms and some

praises on line, so I am not sure what we will end up with. We were talking restaurants with our team captain on Monday and I was telling her about Boa Nova where I took Matt for his birthday last year (the Portuguese/Brazilian restaurant). She had never heard of it, I recommended it. Wouldn’t mind going back there again.

I am a little bit concerned about the earthquake in New Zealand as I know my cousin was intending to be in NZ at some point in time, but whether she was Going to be in the Christchurch area or not, I don’t know. It was quite a bad one with 65 people dead, and at least 100 people thought to be trapped. A 6.3 magnitude earthquake. It occurs to me, we have enough trouble with nature without us humans causing all the trouble such as is happening in the middle east at the moment. Our Prime Minister, Stephen Harper, was condemning the Libyan government yesterday and calling for them to cease firing on their nationals.

High-quality smoked ham is worth the cost. It 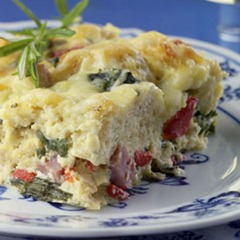 infuses the pudding with a smoky flavor that complements the spinach, peppers, rosemary and Gruyere.
Make Ahead Tip: Prepare the pudding through Step 3; refrigerate overnight. Let stand at room temperature while the oven preheats. Bake as directed in Step 4.
INGREDIENTS

Tip: To wilt greens, rinse greens thoroughly in cool water. Transfer them to a large microwave-safe bowl. Cover with plastic wrap and punch several holes in the wrap. Microwave on high until wilted, 2 to 3 minutes. Squeeze out any excess moisture from the greens before adding them to the recipe.

Toss bread, spinach, roasted red peppers and ham in a large bowl. Add the custard and toss well to coat. Transfer to the prepared baking dish and push down to compact. Cover with foil.

Bake until the custard has set, 40 to 45 minutes. Uncover, sprinkle with cheese and continue baking until the pudding is puffed and golden on top, 15 to 20 minutes more. Transfer to a wire rack and cool for 15 to 20 minutes before serving.