We were absolutely staggered, yesterday morning, to see a very fat and healthy looking black squirrel sitting on our balcony wall. We are on the flith floor 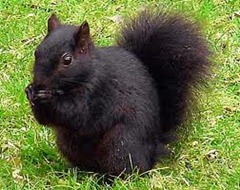 you understand, and have never seen a squirrel climb up here in the 10 years we have been here. It was cold and snowy and I was in my night attire so I couldn’t see if he got down again safely. I do hope so. I would like to have taken a picture of it, but didn’t really have time. Its not even as it there was any food up here to attract a squirrel.

Well I’m damned. I googled to get a picture of a black squirrel and I now read that they are beginning to take over in Britain. We originally started with the red squirrel which has been driven to remote corners of the British Isles by t

he aggressive grey squirrel, now the mutant black squirrel is apparently giving the grey a taste of its own medicine. The picture shows red, grey and  black squirrels. I had already discovered black squirrels were a mutation of grey ones, but didn’t know they had done the same thing in the UK, I had only ever seen them in Ontario, I had no idea they were in England as well. Read the article from the British paper, Daily Mail, http://tinyurl.com/5lhuxf the black is more sexually aggressive too and apparently the grey females seem to prefer them. Of course they are rodents and the only thing that saves them is their pretty, fluffy tails.

An interesting piece of medical news I got yesterday, the FDA have approved the use of a miniature telescope for the eye, useful to people with macular degeneration which is a prevalent eye disease. Hopefully this means that Canada will approve such a medical use in the near future. There are some requirements of course, particularly that you have to have advanced macular degeneration (i.e. you can’t see someone’s face) before they will consider you for the surgery. But still, it is an incredible medical advance.

We didn’t get quite the storm they were rabbiting on 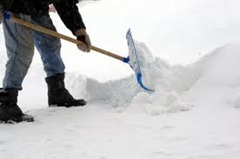 about, but it snowed most of the day so we did get a heap of the white stuff. In fact, in the afternoon it was snowing pretty hard, but the sun was shining through the clouds as well, an odd combination. We certainly got enough snow to make me feel sorry for those who had to shovel their driveways. A major advantage of an apartment building. I had forgotten it was Groundhog Day yesterday too, apparently Wiarton Willie (the Ontario Groundhog) didn’t see his shadow so winter will soon be over – now look out of the window!!!

Kraft have a newsletter for people with diabetes which is full of useful recipes. This is one of the current ones. 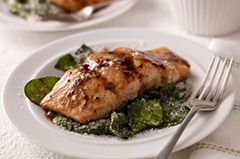 PLACE fish in shallow baking dish; drizzle with 3 Tbsp. dressing. Bake 10 to 12 min. or until fish flakes easily with fork.