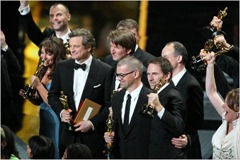 Woohoo, The King’s Speech was chosen as Best Picture and Colin Firth was chosen as Best Actor in a Leading Role. I was so pleased as I was beginning to worry when so many other awards were being given to other movies. Tom Hooper who directed the movie got Best Director as well although I was sorry Geoffrey Rush didn’t manage to get the Best Supporting Actor and Helena Bonham Carter missed out on Best Supporting Actress. My favourite animated movie, How To Train Your Dragon did not get chosen, Toy Story 3 got that nomination. The actress in Black Swan, Natalie Portman, got the Best Actress award. I have to say we were very disappointed in Colin Firth’s acceptance speech, it was full of ums. He was not alone mind you. I cannot understand why these actors can’t learn a speech in readiness and spare us all the hesitations. The Oscar show ended with a choir of children from a Staten Island school in New York. The name of the choir is PS2 and they were apparently flown to Hollywood by Good Morning America once they had been invited to perform. They san a version of Somewhere Over the Rainbow and were excellent, harmonizing beautifully. Very impressive. There are YouTube 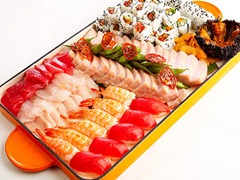 videos of them and I understand they have sung in the whitehouse. The one place I would like to have ended up visiting was the Governor’s Ball which is catered by Wolfgang Puck and his minions. One of the star attractions was his sushi platter of which I have included a picture. I could make a mess of that. If you want to see the rest of the pix and article go to http://tinyurl.com/5st6o8x. Check out those desserts on page 2.

February has certainly made up for the lack of snow in January. We got another good dollop on Saturday night and as it was wet snow, it clung to the trees making everywhere look very pretty. Of course enough wet snow can break branches too. Then yesterday we got some drizzle so the snow started to disappear. 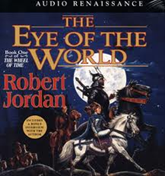 I began reading Eye of the World, the first book in the Wheel of Time series by Robert Jordan. Having recently read the couple of books written by Brandon Sanderson, I found after so many books, I couldn’t really recall everything that had happened so I decided to go back to the beginning. I think this is going to take me a fairly long time.

Now here’s something a bit different. This is from a newsletter I get full of diabetic hints and recipes. I think I would use fresh garlic rather than powdered. 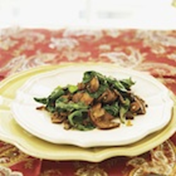 A fresh tasting dish with meaty mushrooms, onion, and garlic.

1 Pull stems from shitakes and discard. Stack shitake caps and cut into quarters. 2 Peel and coarsely chip onion. 3 Rinse spinach and shake to remove water. 4 In large skillet or wok over medium high, heat 1 teaspoon olive oil. 5 When oil is hot add mushrooms and onion. Sauté, stirring occasionally, until onions are translucent and liquid from mushrooms has evaporated, about 7-8 minutes. 6 Add spinach to pan and cover. After 1 minute, remove lid and turn spinach. Add garlic powder. 7 Cook, uncovered, stirring occasionally until spinach has wilted, about 4 minutes. Season with salt and pepper to taste.

Email ThisBlogThis!Share to TwitterShare to FacebookShare to Pinterest
Labels: African Fried Spinach, Eye of the World, Snow, The Kings Speech