A South African airline, Kulula, are going to give Katherine Middleton a herd of cows because of an African tradition of giving Lobola which is explained in the article http://tinyurl.com/4ppy3q4 This is a very innovative airline, they apparently have all kinds of marketing ideas, not least of which is a sign underneath the cockpit window which says “pilot sits here”. The picture of a herd of cows being driven up Pall Mall to Buckingham Palace is absolutely delightful, I will be interested to see what happens.

just re-read Glenda Larke’s book The Last Stormlord as a prelude to getting the third book in the trilogy some time in August – we are promised. I had forgotten what a powerful book it is and how very enjoyable. It is the story of a country which is water deprived and where they rely on stormlords who can take water from the sea and turn it into rain falling over the hills, filling the waiting cisterns. I have just started the second book,

Stormlord Rising which should then enable me to remember everything by the time I get the last of the series. The second cover picture is the Australian version, which I have, but the cover was changed for the UK and US markets. Dunno why, this cover depicts something which happens in the story and is much more pertinent than so many covers designed for stories. I get the feeling that this designer actually read the book which I don’t think is true of many cover designers. One of my pet peeves.

Something discussed on Good Morning America today, the fact that Facebook sparked off the revolution in Egypt. I hadn’t registered that before although I do remember that their government tried to ban Facebook. Really, the power of the internet, in one way or another is absolutely incredible. The power of computers too, last night we watched Jeopardy, as we always do, however, for the first three days this week, two of Jeopardy’s top players are c

ompeting against Watson, a super computer, an incredible piece of machinery which is represented by an avatar. After last night, when they played the first round, Watson was tied with Brad Rutter at $5,000 while Ken Jennings who has beaten Watson before, was lying third with $2,000. Even Matt, who thinks nothing of computers, watched the programme. Read more at http://tinyurl.com/4zhnzsc As I said to Matt, I would love to get hold of that computer, what one couldn’t do! They were careful to point out that, for the game, Watson has no connection to the internet.

Lasagna is a staple dish in North America, everybody, but everybody makes it over here, this is a slightly different way of preparing and presenting such a favourite dish. 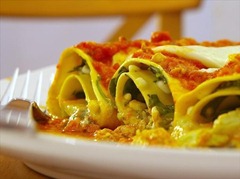 Repeat with remaining filling and noodles.

Arrange spirals, seam-side down, in single layer on top of sauce.

Bake, uncovered, for about 15 minutes until cheese is melted.