Happy Valentine’s Day to everyone. 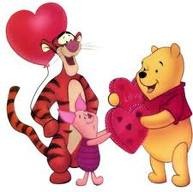 I had a lovely card from Matt today with the message he keeps falling in love with me all over again. Aaaaah. My card to him wasn’t nearly as nice.

On Saturday I made my “chuck everything in and call it a Bolognese sauce” for spaghetti and invited a friend for supper. Of course a genuine Italian Bolognese sauce isn’t like anything most of us make in North America, it doesn’t contain garlic or herbs of any kind. I really got lazy and bought a loaf of garlic bread (not bad but a bit short on the garlic)

and a frozen dessert (Cheesecake with dolce du leche) which wasn’t bad but I found the topping a tad too sweet which is surprising since I have such a sweet tooth. Both Matt and our friend enjoyed it and considering Matt doesn’t like his cheesecake with anything on it, that too was a surprise.

So Egypt finally got rid of Mubarek – let us hope they will form a new government soon and everything can settle down again. I must say, it was a pretty non-violent revolution, more power to both the people and the army. I hope the operators of the Suez Canal will resume work so that tankers can pass through although the super tankers have to go round the bottom of Africa anyway. It seems the revolution hasn’t spread to the other Arab countries in the area which was a big fear here, we envisioned it causing the price of gasoline to go sky high if that happened. Its high enough as it is, thank you very much. This morning I hear the army is well in control and have told foreign reporters they are no longer welcome. That scares me a bit. What is the army planning that they don’t want to world to know about?

We were talking about the oil sands in Alberta which are causing a big furore at the moment. Our friend told us that one of the Avon big wigs in the States criticised the oil sands and so now the people in Alberta are boycotting Avon. I understand their point, but for the ‘little’ people who are selling the product it is very hurtful for them as they are depending on the sales for their livelihood. I believe Avon Canada is very much a separate entity anyway. As for the oil sands, there has been a lot of publicity on TV about how they are handling the whole thing a lot better and more favourably from an ecological point of view. Hopefully this will improve things.

I can’t pass up one last chocolate recipe for this romantic day. Which reminds me, both of Matt’s daughters now have chocolate fountains. I think his oldest daughter is as big a chocoholic as I am as she was using the fountain all on her own when Matt spoke to her recently. Yummm!!!