Now that’s friendship. On Saturday evening it started to snow really heavily around 4. Our friends were due to arrive at 5:30, they drove through appalling conditions to get here, for a start their wipers kept icing up so they had to stop and fix them, and all just because they knew we had been cooking for them. Really and truly, as they said themselves, they shouldn’t have come in that weather. Looking out of our window we couldn’t see the trees in the park most of the time. This snow storm came out of the blue, no-one forecast it, they said light snow, ha!!! We ended up with about 3 inches on our balcony wall and that usually means a lot of snow, especially as the fall didn’t last much longer than a couple of hours. However, they did arrive and we had a delightful evening. Their journey home was not as bad, they told us, for one thing it had stopped snowing by then, but they had to spend half an hour shovelling their drive in order to get the car into the garage. Think I would have left it out and done the shovelling the next day.

It gave us an opportunity to roast a leg of lamb, quite a large one, as there are not so many people we can share it with. Funnily enough having mentioned it at bowling on Friday, we found at least two people in our small Friday group, who did like lamb. Our friends tried mint sauce, which they were unfamiliar with, she liked it, he did not, he joined with Matt in that, he has never like it.

As I just said on another blog, with lots of snow around, once upon a time we would have been out there cross country skiing. We both used to love doing that and it made the winter so much fun and so short. Alas no longer possible for either of us.

Not that I am interested in the Superbowl, but I see the Green Bay Packers beat the Pittsburg Steelers. The Cheeseheads won. I haven’t read a report, but I wonder how many made it to Texas to see the game. The weather was so bad down there and they had lots of cancelled flights. I missed anything about the Superbowl ads which is the only part of the game in which I take an interest, ah well.

For Saturday I tried a new way, to me, of doing green beans, pretty simple, but it improved the taste terrifically. I think the stock helped without anything else. I also saw similar recipes which added lemon juice or soy sauce, I didn’t try either. 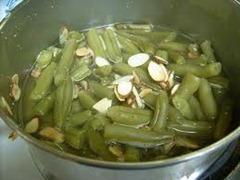 Basically top and tail the beans, then snap into bite sized pieces.  Cook the beans in chicken stock until they are tender. Drain and toss in butter and sprinkle with sliced almonds.