Today we are going out to lunch to celebrate the Year of the Rabbit. We will, no doubt, be eating dumplings as I mentioned last week. As we are meeting friends who are on time constraints we have to leave early, so not much time this morning.

Actually, the weather this morning is supposed to be very cold and as everything yesterday was melting, the roads could be very icy and slippery, in which case Matt says we ain’t going anywhere!!

I received a warning on Facebook yesterday, beware of people asking for donations for Egypt, it’s a Pyramid scam!!!

Often there are discussions on what makes people read different kinds of books in different genres, particularly Fantasy. Personally, I find if a book tells a good story in a well thought out setting, I don’t need to analyse why I am reading the book in the first place. I actually have a novel at the moment which I am finding very difficult to read as, to me, there doesn’t seem to be any flow. Some parts I have read are exciting, other parts the author is rabbiting on about various philosophical ideas and I find it somewhat boring. I think I will be returning it to the library. What I don’t understand, it was on the best sellers list for a while and yet books which I think are excellent don’t make it. Who actually decides this I wonder? It can’t just be readers – most of them don’t come along til a book is already a best seller as far as I can see. Maybe its concentrated promotion by book sellers – I just don’t understand it.

Here’s a recipe with a touch of luxury added. I believe in cooking with wine although I have been told just using stock tastes equally as good, I am not sure this is really true. The French, after all, know a thing or two about cooking.

Chicken in Champagne and Mushroom Sauce

Source: The Heritage of French Cooking

In France, cooking with wine is one of the earliest culinary traditions. It is described in the first written works, such as the fourteenth-century Le Viandier by Taillevent, and is a great national tradition that has continued unbroken for six centuries. In this recipe, the Champagne and cream lend considerable refinement to the tender chicken meat. 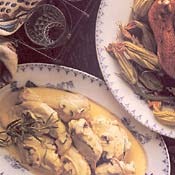 FOR CHICKEN: Remove the skin from the chicken pieces and make incisions in the flesh. Put the chicken, shallot and tarragon into a 10 1/4 inch nonstick sauté pan. Season with salt and pepper and add the Champagne. Bring to a boil over low heat. Stir, cover and cook for 30 minutes.

FOR SAUCE: Mix the cream, arrowroot and mustard. After the chicken has cooked for 30 minutes, pour this mixture into the pan and cook, covered, for another 15 minutes over low heat.

Meanwhile, cut off the mushroom stems level with the caps and discard them. Wash the caps, pat dry and finely slice. Add to the pan after 45 minutes' cooking time and cook, uncovered, for 10 minutes, stirring often. Serve immediately.