I love Wikipedia, I think its an excellent source of information and knowledge and personally wouldn’t want to live without it. However, you may not know but it is basically funded by contributions by private sources, they do not have advertising to sustain them. Right now they are asking for donations and I just sent in a very modest amount. I thought I would mention it to you as I think it is a wonderful service to the cyber world and would hate to see it disappear. Wouldn’t it be wonderful if every person who has ever used Wikipedia were to send in a small amount? They would be set for years. 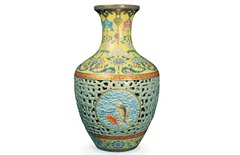 Along with everyone else I was staggered about the 18th century Qianlong Vase from China which was auctioned in London last week and which fetched a record price of £43 million, that is one hell of a lot of money. The vase was apparently in someone’s attic collecting dust for years. I am not sure how much the seller actually got for this as he had to pay the auction house a few million as well as the government, but I have no doubt it was a pretty hefty sum. I don’t see anything on the internet but I also heard on the news that it was a very clever fake, but that seems to just have been a brief rumour or hoax. I would think that Bainbridge’s. the auction house, would have authenticated the vase very carefully before putting it up for auction. I was wishing we could find something similar but as Matt pointed out, we don’t even have an attic.

I have written before about bulls jumping the fence, it just happened again at a rodeo in Edmonton, Alberta, four

people were injured. They are saying that it’s the first time its happened in an indoor arena – so – if a bull is going to jump he doesn’t give a damn whether he is in our out of doors. There is some video here http://tinyurl.com/3xzyk6t The officials are saying an event like this is extremely rare, how come I have written about it before and found several instances on the net. Admittedly most instance are of bulls in bull rings being fought by matadors and this one had only been ridden, but even so, bulls jump fences and it is not that rare. Moral of the story, don’t sit close to the ring and maybe raise the fences too.

GMA Sunday there was a bit about exorcism, I didn’t actually catch most of it, it was to do with children in Africa being exorcised, but a priest was interviewed and asked how one knew possession had taken place and one of his criteria was that the person (often a child) was talking a language that they couldn’t possibly have learnt. Err, didn’t the apostles get blessed by tongues after Jesus died, and was this exclusive to the apostles or could it happen to other people? You’ve gotta be consistent here, surely? If you believe one then you have to believe in the possibility of the other. The host said the exorcism looked like child abuse to him, must say I thought so too.

Yesterday morning, I was getting dressed and gazing vacantly out of the window and saw a couple of black squirrels chasing each other along the grass and up the trees and such. I was thinking how lucky we were to have a park right outside our windows where we could not only watch the seasons but also see some wildlife, albeit not a lot of wildlife. Then I thought, middle of November and still grass. Certain States and provinces have been socked in with snow and so far we have had one slight flurry which I didn’t even get to see. Surprising when there is so much snow elsewhere. I am not complaining you understand, I prefer this mild weather, but Matt tells me we can expect it to get a lot colder and possibly snowier in the next day or two. Ah well, too good to last I suppose. In fact I hear we are going to get flurries, at least, by the end of the week.

Here, for me, is a somewhat different recipe. I like black beans, well all kinds of beans really, and I was reading this morning how good beans are for lowering cholesterol, hence a black bean recipe which you can throw together quickly.

In a hurry? These satisfying quesadillas take just 15 minutes to make. We like them with black beans, but pinto beans work well too. If you like a little heat, be sure to use pepper Jack cheese in the filling. Serve with: A little sour cream and a mixed green salad. 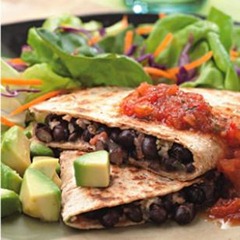