Right, that’s Christmas sorted. We are going with friends to Rushes – a local restaurant – for their Christmas buffet. We went once before and it was very good. They do not, in fact, hold it in the dining room but in a hall as they get such a large number of bookings. I was fascinated last time because they had so very much food including what seemed to be a continuous stream of turkey, beef and ham. All of which is beautifully cooked. They also have masses of starters and desserts up the kazoo. One dessert they had last time was a bread pudding with ginger sauce which I tried, delicious. Prior to that I hadn’t had bread pudding in years although I have several recipes for different versions. I don’t make that many desserts, especially when we are alone, I would be like the side of a mountain if I did although Matt would continue to be his slim self, no doubt.

Exchanging emails yesterday with Andy Hayler, whom I mentioned in my blog, he recommended a some books I might enjoy because I am enjoying the Millenium series (Stieg Larsson). The Wallander stories; apparently there is a TV series in the UK from these books. I have ordered the first one from the library. Thanks Andy.

Tomorrow Matt gets rid of his loop monitor, he will not be sorry. We are also going to get our flu shots, that means I will have a sore arm for a week, Matt doesn’t get any reaction at all. I was going to divorce Matt years ago, for cruelty, he never needs anything done to his teeth, he never gains weight, he never gets hangovers and these days he doesn’t get a sore arm from a flu shot. If that’s not cruelty, I don’t know what is. Actually I don’t really believe in flu shots for us, we haven’t had flu or a cold in years.

My friend just sent me her recipe for rolled ribs: when she serves these she also serves a gravy which certainly goes with the ribs although she tells me she would have gravy on everything. Its funny to me how some people love gravy, a friend of ours in the States used to particularly love white gravy – a real southern food. Personally I have never been that fond of gravy of any kind although I do eat it now and again an if any I prefer the one I make. Matt calls it jungle juice and if he runs out of meat will eat it on bread.

4 small strips of back ribs (beef) 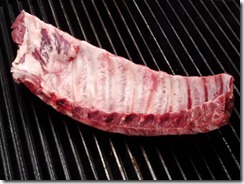 Take the skin off the ribs ( I find if you don't do that they get tough) I always put some garlic on the inside too. Spread the stuffing on the ribs and roll them up make sure you don`t put too much in it or you will have a hard time rolling it Stick one toothpick in it and put string around it or they fall apart when you cook them Cook on 350°F for about 1 1/2 hours turn them once or twice I do not put water in the dish right way but when I check them I put some in or you can use beef broth but not too much, you don’t want to boil them.