Woke up to a bright clear morning, the last couple of days we have had thick fog. Reminded me of being back in the UK – not that fog is exclusive to England, but these we have just experienced were almost pea soupers. I remember driving through thick yellow fog (smog) in my 20’s and having to sit half on the passenger seat in order to see the side of the road. Before my driving days, they used to have windshields which could be raised in order to see better. I also remember fog at sea which is very difficult, even if everyone uses fog horns, it doesn’t necessarily help as the fog distorts the direction of the sound, the only thing you really know is that there is something else out there. Someone has to stand outside on the deck, cold and dripping and peering into the fog to try and see if there is anything in the way. Best thing really is to anchor if you can, but even that isn’t always safe and you still need to sound the horn. Another very dangerous thing at sea is fire, such as the fire in the engine

room of the cruise ship the other day. You can’t call for fire fighters to come and help you. We once had a fire on my father’s boat – a wooden boat mind you – but luckily it was brought under control without causing too much damage. Very scary thing to happen though.

After raving about the Millennium series by Stieg Larsson, I am having a little trouble getting into the latest book. I am sure it will improve, but right now…..

Did I mention I have a sore arm!!!

One of my favourite fish is Arctic Char, I don’t think I had ever eaten it before we came to Canada. I think it is wonderful fish. There used to be a restaurant in the next town, Cambridge, where one of the owners smoked both Salmon and Arctic Char. I tried his smoked Arctic Char and thought it was better than the smoked Salmon which I love. Unfortunately the restaurant is now closed and I have no idea where the owner lives and whether he still smokes his own fish. However, yesterday I got a recipe from my local seafood store which is for Arctic Char, so I thought I would share it with you. If you can get hold of Arctic Char I highly recommend it.

2 Arctic Char fillets (about 1 pound each) 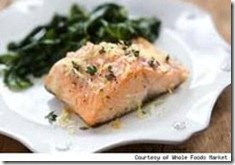 Salt and pepper, to taste