I get an email from the How to Geek which frequently has links to sources of wallpapers. The latest one had all kinds of tigers, lions, cheetahs, leopards and then right at the end, was the one I finally chose. The most dangerous of all the wild animals. 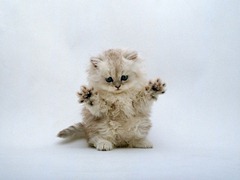 Don’t you think that’s cute? Thinking about it some more, I believe this was the kitten picture used with a gun to show the kitten was being held up. It won’t last long, on December 1st I have an Advent Calendar wallpaper starting which I got from www.JacquieLawson.com I use that site a lot for ecards of all kinds and this year took advantage of their new offering of an Advent calendar.

Saturday I rented (actually I got it as a gift from my server) The Expendables. In one way I was disappointed because on the previews I had seen it implied that a whole bunch of well known ‘hero’ actors were part of a group of mercenaries. Not so; both Bruce Willis and Arnold Schwarzenegger appear for a few minutes, but actually it is all Sylvester Stallone and friends, some of whom may be well known, but not to me. However, it wasn’t a bad film although Matt didn’t watch it, his comment from the computer room was that they used as much ammunition in the movie as they did in the second world war. One crack I thought was funny, somebody inquired what was wrong with the Schwarzenegger character and Stallone said ‘nothing, he just wants to be President’.

Watching Good Morning America on Sunday, they reported on a number of otter attacks. Yes, otter attacks, the emergency operator had trouble getting hold of that too. They are not sure why, but of course one reason could be rabies. Bit hard on the people who have been bitten, don’t know what the treatment for rabies is these days, it used to be shots in the stomach.

I have said before, I am always looking for new things to do with vegetables. Over the weekend Matt picked up the magazine Food and Drink from the LCBO (liquor store) and they have several good recipes for veg. This one is for parsnips which so many people say they don’t like (including Matt) and I thought it sounded good enough to eat.

Try this instead of the usual mashed potatoes. It is fabulous with roast chicken, roast beef or sautéed lamb chops 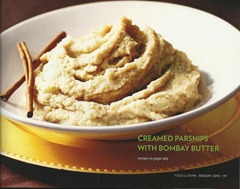 Place parsnips in a pot of salted water over medium-high heat, bring to boil and cook for 10 minutes or until very tender. Drain, return parsnips to pan and place over low heat for 1 minute or until all water has evaporated.

Place parsnips in a food processor with garam masala, cinnamon and butter and purée until smooth. Add whipping cream and process until well combined. Season to taste.