The Amazon, DVDs and Books 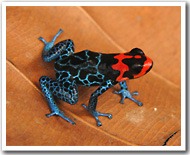 I get a regular newsletter from The World Wildlife Fund and just recently got one talking about exploration in the Amazon where they are discovering new species at the rate of one every three days. It is incredible to me that so many things are left to be discovered, but as our abilities progress, we are able to explore further than before. This picture shows a previously unknown poison dart frog – if you click on http://tinyurl.com/2dwj7nt you can see a lot more pictures and information about the discoveries which have been made there.

For those of you who, like me, love Celtic Thunder,

Amazon.com or .ca are now advertising their latest Christmas DVD for pre-order, it will be released on November 22. I have been looking forward to this DVD for a while as I saw some shots from it earlier in the year which looked like fun. The DVD is called Celtic Thunder Christmas and in Canada is retailing for $17.49 at the moment.

I was thinking about longevity yesterday, not of people but of possessions. I have two bathmats that I bought in the UK almost 50 years ago and although one is a little bit the worse for wear, the other is still going strong. Today most things appear to have built in obsolescence and you can only get a few years wear out of them. The same can be said for clothing – when I was a youngster, we repaired (or had repaired) clothing, we darned socks, sewed hems and so on – I was actually very good at darning. Nowadays if you get a hole in a sock it goes in the garbage.

I have just finished reading a Miles Vorkosigan book The Warrior’s Apprentice by Lois McMaster Bujold. I love those books and I hadn’t read this one before. There are quite a few books in the series, all individual stories although they do fall in sequence. Now I am r 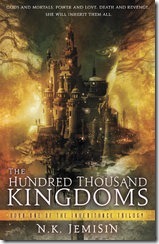 eading a book recommended on Sia McKye’s blog by a new author whom she interviewed the other day, by the name of N.K. Jimisin. The books is called The Hundred Thousand Kingdoms and is a delightful story about captured godlings being treated as slaves inside a palace built by the gods and taken over by one family who rule an empire. I am enjoying it very much. I am hoping to get book 2 fairly quickly.

I have now got my blog feeding onto Facebook which is supposed to give more exposure to my advertising. Hint, hint.

Tonight we are going to the Hespeler Legion for Pig Tails and Schnitzels. We have been two years running and always enjoyed ourselves. Tomorrow we celebrate a friend’s 50th wedding anniversary at the same place, so a busy weekend. Makes me think of the old joke about a man refusing to eat pig tails because of where they came from, the waiter asked what he would like instead, he said he would have an egg.

Talking (as I was yesterday) of Sheila Hutchins, here is a recipe from her Daily Express Cookbook. Watercress is found in North America, but not very often I’m afraid.

For watercress soup, use two nice bunches of 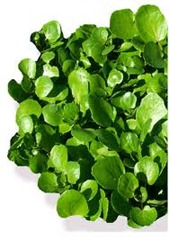 watercress and let it simmer in two Tbs of butter in a saucepan with a lid for about 15 minutes., stirring occasionally (keep back a few leaves for garnish) and adding two large peeled potatoes cut in chunks Add salt and pepper and two pints (40 fl. oz.) of water and cook it all gently for about 30 minutes. Then make a purée of the vegetables in a blender or by putting them through a sieve. If you like, stir in a beaten egg with a spoonful of top of the milk (cream) at the end with a Tbs of butter (essential to the flavour) and the watercress leaves. For brussels sprouts leave out the potato, use about 1 lb of sprouts, outside leaves and all, coarsely chopped.