Luckily it Wasn’t my Heart. Weddings and Serbia.

So Saturday night I ended up in the hospital. Guess I really mean Sunday morning. We went to bed about 11.45 summer time and shortly after that I had really bad chest pains. What with one thing and another and having tried medications, we called for an ambulance and I was taken to the heart clinic. They established quite quickly that I wasn’t having a heart attack, thank God, and then went through all the necessary tests and came up with a negative answer to all of them, in other words I was fine. Er…. please sir, I’m in severe pain. They gave me a shot of a strong painkiller and eventually sent me home. Only trouble with that, I had no shoes, luckily I had a heavy sweater to put over my nightdress. They gave me some of the bootees surgeons wear over their shoes, better than walking bare feet, but they didn’t protect against sticks and stones or anything else sharp. One of the nurses said I was setting a new fashion. Sunday morning I was still in pain but I don’t know why. I spent Sunday dozing and feeling sorry for myself. 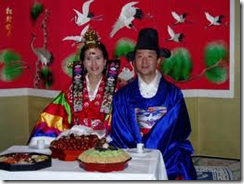 In the afternoon we had attended the wedding of our friends’ grandson and his bride. They married a month ago in Korea. Saw pictures of that wedding, the bride had to wear 5 different dresses, what a palaver. They have pictures of them looking like this (no this isn’t them) and then several of them in more Western dress including white wedding dresses and another in red. It is the normal practice for the bride and groom to pose for all kinds of pictures before the wedding as well as lots of less formal pictures during the ceremony and reception. One white dress in particular really appealed to me, it was gorgeous with a very full skirt. Saturday’s ceremony went very well, a kind of reaffirmation of their vows followed by dinner at a locally popular restaurant.

At the restaurant we were sitting with some friends who’s origins are Serbian. We were talking about the foods I ate when I was there in 1969. To me, of course, it was all Yugoslavia and that is how I still think of that area. I was fondly remembering the wonderful scenery and the incredible Frankish castles which kind of litter the countryside. When I was there, of course, the country was still run by Tito and the government was communist. I gather a lot has changed since then. I am always talking about most Canadians not liking lamb these two, of course, do. I should look up my pictures of that trip and share them with you.

Sadly I have just finished The Girl Who Played With Fire by Stieg Larsson, another Lisbeth Salander book. Unfortunately there is only one more as he passed away after writing the three stories. I heard from a friend in South Africa that the films were actually made in Sweden and have English subtitles. The character of Lisbeth is supposed to be based on what Stieg Larsson imagined Pippi Longstocking would be like when she grew up.

Yet another email I receive is Ten Thousand Villages which includes all kinds of food information and usually a recipe or two. In the recent edition this fish recipe from Peru appealed to me. 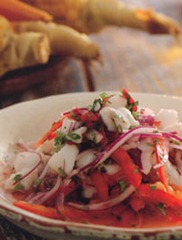