Last night there were lots of horrifying statistics broadcast about the cholera in Haiti. Possibly 2,000 dead, between 50,000 to 70,000 sick and thousands more expected to become sick and yet they are still going ahead with the election. Seems somewhat irrational. By the way, the actor, Sean Penn, has been on the ground in Haiti for the last year since the earthquake happened. My admiration for him has increased by leaps and bounds. He appears to be mainly involved in clearing up the devastation, removing the rubble and making areas at least partially habitable.

This morning I have decided to go with my husband on his early shopping trip, he gets to the store shortly after 7 and as they have carts which can be driven, I have decided to go as well. There are things he doesn’t see – he sticks to the list and mostly that’s that. If either of us forget to put something down, we don’t get it. I am more likely to look at what’s there – of course I am more likely to overspend too *g*. Its funny, when I saw the vascular surgeon I said I wanted to go shopping, I have no doubt he thought I meant the kind of shopping most women love, looking at clothes and fashion items. I didn’t, I meant grocery shopping. Very unfeminine of me, but I generally hate to shop. So, only a short blog.

For all of you in the States who are about to cook yourselves silly on Thursday with a Turkey, all the trimmings and Pumpkin or Apple Pies, here is a cranberry relish which would make a nice change from the general run of the mill cranberry sauces.

Unlike cranberry sauce, a relish involves no cooking. Here, plump raspberries add a juicy freshness, while crystallized ginger provides sweetness and warmth. It is best served cold. Hold the mayo on your post-holiday sandwiches—use this relish instead for a real treat. 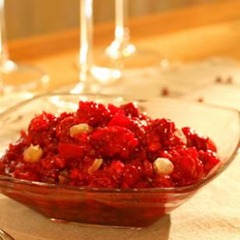