Hurricane Tomás has been doing quite a number in the Caribbean lately and has just hit earthquake ravaged Haiti. It didn’t do as much damage as expected, but did give them lots of rain which they don’t need. The extreme wet assists in spreading the cholera which has already killed 400 people. There are still thousands living in tents who had nowhere to go even if the hurricane had been a direct hit. These same people are not always able to get hold of fresh water, so end up drinking what is available from puddles and pools thus risking more cholera. It is a pretty dire situation.

This makes me think of all the disasters which have happened in recent years, one of the worst being the huge tsunami from a few years ago, one never hears reports on how those people are doing. Then in Indonesia they are coping with the affects of another tsunami together with a volcano which keeps erupting. It seems the earth is in a state of great upheaval lately. Watching the Geologic Journey II episode the other night, it begins to be surprising that anywhere is very stable. The plates on which the continents are sitting are moving continuously and therefore causing all these earthquakes and volcanic eruptions. Fascinating, but scary just the same http://tinyurl.com/2azkfc8 the latest programme dealt with the Pacific Rim which is exactly where Indonesia is situated along with Japan 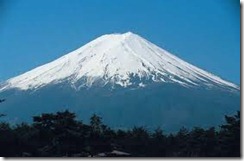 which is so very used to earthquakes. I must admit I hadn’t realised how very large Mount Fuji is, it is a classic mountain shape and really towers above the local town which you don’t see in the pictures. Nor had I, silly me, realised it is a volcano just sitting there waiting to erupt once more. Why do people build next to, or even on the slopes of, a volcano? Why do people build right on top of a fault? Can you tell me? The Japanese hold a ceremony every year to appease the goddess of Fuji, I hope for their sakes, she is listening. However, I’ve got news for them….

Got a wedding to attend this afternoon, the grandson of some good friends of ours. He has been teaching in Korea for the last few years and has actually already wed his Korean bride out there, however, they are having another ceremony this afternoon. I don’t really have a lot in the way of clothes to wear to weddings. Guess I will rake something out. With the way my weight goes up and down, I am lucky anything I do have still fits.

Dr. Oz was on GMA briefly this morning he is doing a free clinic in Chicago (plans to visit other areas) promoting the concept of “knowing your numbers” these being 5 numbers of Blood Pressure, Cholesterol, Waist Size, Weight and Fasting Blood Sugar – the Heart and Stroke Foundation would add BMI to that. I wonder how many people do know these numbers. Most of mine either I know or my docs do. One thing about being diabetic, these figures are monitored constantly. Go to http://tinyurl.com/28gvtxv to see what Dr. Oz says.

A local seafood shop, T & J’s, periodically send out a recipe to their customers. This is the one I have just received, considering how much I enjoyed the mussels at the Olive Garden whilst I was away, I was interested to see this somewhat different recipe. Mind you mussels are very expensive around this neck of the woods

Mussels with Bacon, Shallots, and Apple 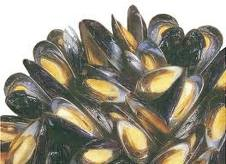 Cook bacon over a medium high heat in a wide saucepan until rendered and crisp. Drain off some of the fat. Add shallots and apple. Cook until slightly caramelized. Add mussels and stir to coat. Deglaze with apple cider, and vinegar. Reduce slightly. Add cream, thyme, salt, and pepper. Cover and cook until all the mussels are open and the sauce is reduced and slightly thickened. Serve in the pan or transfer to a large, wide bowl. Serve with toasted French bread.