Last night we were invited for dinner which made a nice change. We had a very enjoyable evening. Good food, good wine, good company. Our hostess told us a story which I thought was funny. Her son-in-law had to phone his company help line which – as so many here – is outsourced to India. The person in India kept asking him to identify himself by providing the name of his nicey. He kept asking her to repeat herself and she kept saying nicey, eventually he asked her to spell it – niece!!! This is the problem with outsourcing because although they might speak excellent English, many of them don’t pronounce it the way English speaking people do and it is almost impossible to communicate. I recently called my internet provider and got service from the Philippines, luckily the young man I spoke to talked “English as she is spoke” so I could totally understand what he was saying. He was telling me that the Philippines is trying to get a large chunk of the IT market.

Incredible story on the news at the moment, about the three young New Zealand men who were lost at sea for 50 days. One family had already held a memorial service for their family member assuming them to be dead. They did have a few coconuts at the beginning apparently and managed to catch enough rainwater to drink, they also managed to catch a seabird to eat. Their incredible story and a video clip can be seen here http://tinyurl.com/24tm9q7 It was only by the merest fluke that they were found because a fishing vessel decided to see their catch in New Zealand for a change and spotted the boat on their way in.

Well, at long last we have had some snow, not enough to do very much but it is lying on the ground this morning. It was certainly very cold last night and blowing a gale too. Unfortunately, we discovered we have a problem with heat in our apartment, something has ‘gone wrong’ we called and the man who stands in for our super came up straight away and ‘by passed’ the system to allow some heat to get into the apartment, not very much however, so they will be calling in the plumber on Monday. Our heat (when its working) is provided by hot water pipes running through the building.

In this cold weather, soup sounds good to me, I just received an email with turkey leftover suggestions and turkey salad was one of them, but my mood is for something much warmer and more comforting. I just found this recipe on the internet, not only is it a recipe, but an interesting little tale about how it was first invented. It is a soup we like very much and I make quite often. I found this on a new (to me) site called Soupsong (www.soupsong.com) which, for those of you who speak French, is, I think, a play on the word soupçon or I may be reading too much into it and it is just in reference to Lewis Carroll’s Turtle song. If you chill this soup and add some more cream then garnish with chopped chives, you have Vichysoisse, another favourite soup albeit mainly for hot weather.

This excellent French soup is as smooth and elegant as it is simple; serve hot to 6-8 people as a first course.

Soup Tale: France was beset with famine following the Seven Year War (1756-1763). Native son Antoine Auguste Parmentier, who had been fed the so-called poisonous potato root in a German prison-of-war camp, returned to France to find his country men starving. He set up potato soup kitchens throughout Paris to assist the poor. Ultimately, Louis XVI recognized his work by saying, "France will thank you some day for having found bread for the poor." In fact, he is best honored by the pleasure his country take in digesting Potage Parmentier.

3 cups leeks, white and tender green parts, sliced (although not original to the recipe, the soup is enriched by sautéeing the leeks 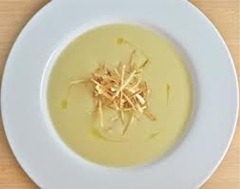 in 3 Tablespoons of butter as a first step)

8 cups water (chicken stock is not original, but enriches it)

In a Dutch oven, simmer the potatoes, leeks, and salt in the water until all are very tender--about 50 minutes. Puree the mixture, then correct seasoning.

When ready to serve, stir in the cream, ladle into bowls or a tureen, and decorate with herbs.