I wonder how many people on this side of the pond are familiar with scrumping? It means raiding orchards and helping oneself to fruit (a polite word for stealing). It used to be a v

ery popular pastime with little boys in England. Matt was telling me one story this weekend, I hadn’t heard it before. He was out biking with some friends and they came across an orchard which looked tempting, they parked their bikes and over the fence they went. Unfortunately the famer happened to be in the orchard and Matt told him he had needed to use the tire pump and when taking it off his bike it had flown out of his hands over the fence and he was looking for it. The farmer was so amused that he let them get away with it. Of course, sometimes the farmers took exception, justifiably, and were quite likely to box your ears, then the bobby (cop) would come along and box your ears as well. When you got home, your dad would ask why you were crying and then box your ears as well. Dangerous business this scrumping. I guess if enough kids went scrumping it could make quite a difference to your harvest.

For us, we had a very busy weekend. First there was 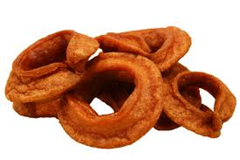 the Pigtail do at the Hespeler Royal Canadian Legion, Cambridge,  which was fun, I ate two pigtails and a schnitzel with some sauerkraut. I was good, I didn’t go back for dessert. To be honest, they didn’t appeal to me that much which was a good thing I suppose. I enjoyed the pigtails but in fact I do prefer them to be crisped up rather than done in sauces. Years ago we used to buy small pails of frozen pigtails which had been marinated in fruit juices, we would then cook them on the barbecue when they became beautifully crispy. Must admit, I have never seen them curled in rings as shown in the picture.

Then Sunday, back to the same place for a 50th Wedding Anniversary which was a delightful occasion. Lots of films and pictures of the happy couple plus messages from their friends and family in Holland which is where they came from some 50 years ago. I know the “bride” was shedding a few tears. She had a very lovely wrist corsage which went very well with her outfit which was most attractive. The finishing touch, her nails were painted silver which matched everything else very well. They have a couple of friends over from Holland and all four of them will be coming to Elmira on Thursday for our Travel League. Even the husband intends to bowl and he doesn’t usually do so.

The Americans are protesting like mad about the security measures at airports. They are not only being fully screened with a mild dose of radiation, but they are being subjected to pat downs. In fact, I understand, this is not happening at all airports, 80% won’t have any trouble at all. However, I personally would suffer a pat down so long as I knew it helped to ensure my plane was free of any terrorists or their weapons. People are so concerned about profiling that now everyone has to be treated the same.

All the chefs are now pulling out the stops with recipes for Thanksgiving which takes place on Thursday, even Jamie Oliver who is from the UK and certainly doesn’t normally celebrate Thanksgiving at home. I am always looking for different ways of preparing vegetables, here is one for green beans. 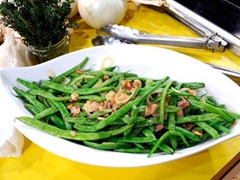 Increase the heat to medium-high and add the chicken stock. As soon as the stock begins to boil, place the lid on the pan and cook the beans for about 6 minutes. Remove the lid, season the beans with the salt and pepper, and toss well. Replace the lid and cook until the beans are tender, 1 or 2 minutes longer.

Remove from the heat and transfer the beans to a serving dish or small platter to serve.