On Good Morning America today, they had a segment on people who write blogs and make thousands of dollars doing so, lucky them, I guess I am doing it all wrong, I earned $100 with Adsense when I first started, but since then, when they decided to drop me, I haven’t earned a penny. I have said before, I don’t know why they dropped me, but as I have since heard they dropped others just as inexplicably, I don’t feel so bad, just annoyed because there is no real court of appeal. I guess I basically blog because I enjoy it. I like writing about all kinds of things, in particular food of course, and I do have a few loyal followers, for which I thank you. If anyone happens to buy anything through a link on my site I would get commission, but as no-one appears to be rushing to do so, I am out of luck. However, I still love to write and will continue to do so: I hope you will continue to read. 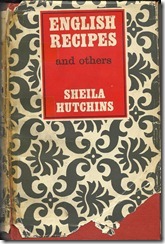 There used to be an English food writer by the name of Sheila Hutchins who wrote for the Daily Express newspaper in England. I have two of her cookbooks, one a collection of her food articles from the paper, and another called English Recipes and Others from Scotland, Wales and Ireland which is full of old recipes she has collected for years. She had a huge collection of cookbooks, not in pristine condition either, but well used, and her descriptions of the books she collected from all kinds of places for many years, is fascinating to read. I have just been Googling for Sheila Hutchins but cannot find out very much about her other than that she was born in Cheshire, happy coincidence, so was I. Reading her introduction makes me feel hungry; her descriptions of what was available to the English in the early eighteenth century – we apparently ate better than anywhere else in Europe at the time – make one’s mouth water. Our meat, poultry and cheese was some of the best anywhere and we had loads of wonderful sauces to use with these plentiful viands. Once upon a time there were lots more British cheeses which have disappeared over time although I understand that since we emigrated there have been quite a few new cheeses introduced. Even since I was a child, many dishes have disappeared from the average English menu and most of them have certainly not travelled to the New World.

The reason I am writing about her is that I decided the other day I would cook a particular recipe which I found in her book and which I haven’t made in years. It was delicious, but Matt has never had the chance to taste it. In my programme on the computer, I have modernised the instructions, but I am giving you her original from the West Kent Women’s Institute. This recipe was designed for old birds, but we never see those any more, so I have always done it with a young one. Sheila Hutchins suggests adding a little tarragon or thyme to the rice which should be well seasoned. One thing I should mention is the 1 pt of milk is a UK pint which is 20 fl. oz. I have always used white rice and I have never had to add more milk during the day, however, be sure to check. I know a lot of people don’t bother with these recipes, but do try this one, it is so easy and requires so little effort. 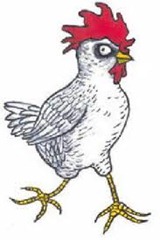 First thing in the morning, say about 8 o’clock, put the fowl in a baking tin with a lid. Round it, put a cup of washed rice, natural brown rice is the best, 1 ping of milk, a dust of powdered mace, salt and pepper and a very small peeled onion in each corner. Cover tightly and put it in a very slow oven and leave it all day to look after itself. At mid-day look to see if more liquid is required to keep the rice soft. By evening all should be just ready. The fowl should not be at all dried up if the oven has not been too hot, but should be exceedingly tender. Dish the bird with the rice round, if liked with a few quarters of hard boiled eggs as a garnish.