There’s been a lot in the news lately about the actor Charlie Sheen who recently trashed his hotel room and was found in there nude and drunk. The reports now say someone had stolen his watch which cost over $100,000 – but that loss plus the cost of the room repair is chicken feed to him, he earns $8,000,000 a half hour episode of his series. To my mind, this kind of behaviour is a consequence of stars being over paid. This particular actor (well he is acting up!!!) is no exception to the kind of things these people do because they have so much money, are bored, and feel they can do anything they want. I have always like his dad, Martin Sheen, but of course we only know about their on screen personalities unless they do something which hits the news.

Hey, did you know, the Queen is now on Facebook? Not sure if it’s her personally or a representative from the Palace. Who’d a thunk it??? I must go and have a look. Apparently within a very short time of her joining she was inundated with ‘friends’. I would think opening herself up to the public like that could lead to all kinds of abuse.

Yesterday Matt went bowling but I stayed at home. Our team captain wrote down all the scores as Matt said I would never believe them!! He had three pretty good games. However, our captain had had super games and ended up with a total of 666 which prompted someone else to write “the devil made her do it”. I have heard before that 666 is supposed to be the devil’s number but I have no idea why. So I googled. It appears that the origin of this “number of the beast” is in the Greek version of the bible, in Revelations, which has been translated as six hundred three score and six – to read about it go to http://tinyurl.com/znaan – it appears to be something to do with each letter being ascribed a number in the Aramaic alphabet and therefore in this case the numbers of the beast add up to 666. 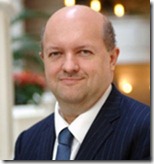 I have just come across Andy Hayler who is a professional food writer from the UK and who appears to have travelled all over the world critiquing restaurants which, by the way, he pays for himself, so there is no bias. He has a web site at www.andyhayler.com and you can research restaurants in which he has eaten together with reading about Andy himself and his blog. I first came across him in French Marilyn’s blog yesterday. I wrote to him about a restaurant which was once very famous in London – Stone’s Chop House – unfortunately it is no longer there. What a pity, it was originally opened in the 17th century and had lasted a long time. They served traditional English food such as roast beef and Yorkshire Pudding, Steak and Kidney pudding and chops of course, lamb chops and pork chops. My parents used to eat there a lot and I went once or twice as a young woman.

I seem to be posting a lot of soup recipes lately, but I do love soups of all kinds and it is a wonderful comfort food in the winter. Of course Australia is heading for summer so they won’t want hot soups for a while now. I’ve actually never made a soup with cheese in it, not sure why. I should get on and do so because I know they taste good.

A few simple ingredients make a sumptuous soup. Be sure to use a high-quality cheddar; it's crucial to the dish's flavor. Choose a yellow cheese for the richest color. For a chunkier soup, skip the pureeing and just break up some of the potato with a spoon.
INGREDIENTS 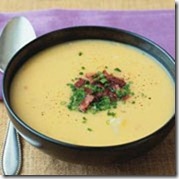 3 pounds baking potatoes (about 6), peeled and cut into 1-inch cubes

In a large saucepan, cook the bacon over moderate heat until crisp. Remove the bacon with a slotted spoon and drain on paper towels. Pour off all but 2 tablespoons of the bacon fat or, if you don't have 2 tablespoons, add enough cooking oil to make up the amount. Reduce the heat to moderately low.

Remove half the soup from the pan and puree in a food processor. Alternatively, mash some of the potatoes with a potato masher. Return the puree to the pan. Over low heat, add the cheese and stir until melted. Remove the pan from the heat. Taste the soup and add more salt if needed. Serve the soup topped with the bacon and chives.

VEGETABLE TIP:
Boiling potatoes have less starch than baking, or Idaho, potatoes and consequentially hold together better when boiled. This is why they're often used in soups and for potato salads. Not in this soup, though. Since we want some of the potato to break down into smaller pieces and thicken the soup, baking potatoes are the perfect choice.