Isn’t there something wrong when you cannot go into hospital without losing your jewellery (if you are unconscious that is) a friend recently did just that and lost everything including her wedding ring. I know one elderly woman in the States who lost her wallet too. If either of us is going in to the hospital – even though we are conscious, we remove everything, we take our health card and drug information and that’s it. But, who, why, what? Is it the staff that steal? The nurses, the doctors? Presumably it’s the nurses who remove the jewellery from the patients? Then what happens to it? Nobody seems to give a damn and surely someone should. 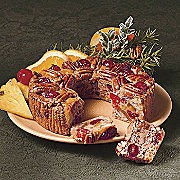 When I lived in the States, I used to buy things occasionally from Swiss Colony who make the most decadent goodies. I recently discovered they do a line in sugar free items including a Christmas cake. When I went on line it said these things could not be shipped to Canada, however, I have just phoned them and I can get the Christmas Cake and some cookies shipped. I wanted their sugar free vanilla cheesecake but they cannot ship that. Oh well. I used to buy their Dobosh Tortes which were to die for, if you are in the States, you should check them out. They do all kinds of other foods such as hams and cheeses.

I mentioned, on Saturday, about the heat problem in our apartment. It is on its way to being fixed, but at the moment its like living in a sauna bath even though we have the windows open. At least we left for a while yesterday to go bowling, think I will have to visit somewhere today just to get away from it. The super says he will be getting a part today and then fixing it – ve shall see. He did at least come up to check everything out last night.

I briefly heard something on the news last night about reversing the aging process. They have had some success with mice apparently. If they do manage something like that, I have no doubt it will be prohibitively expensive for a long while so I guess I shall just have to go on getting older gracefully!!!

Pursuing the different vegetable theme, here is one for Brussels Sprouts. I actually like them, but a lot of people turn up their noses. Mind you, I think too many people haven’t eaten fresh Brussels Sprouts properly prepared. I know one friend who had only ever eaten frozen ones which I personally can’t stand, once he tried fresh, he loved them.

Heat butter in a sauté pan over medium-low heat. Add sprouts and sauté for 1 minute or until coated with butter. Turn heat to low and cook another 5 minutes, tossing occasionally or until soft. Sprinkle in sugar and lemon juice, turn heat to medium-low and continue to cook another 8 – 10 minutes or until sprouts are nicely caramelized. Season with salt and pepper to taste.

While sprouts are cooking, heat olive oil in a separate skillet at medium-high heat. Sprinkle in prosciutto and sauté for 1 to 2 minutes or until crisp. Set aside. Remove prosciutto from pan, drain on paper towel, then sprinkle over sprouts.