Matt has some slippers he has had for 100 years, well it seems like it, I wanted to replace them a while back but he wouldn't let me. This weekend I received some I had ordered from Amazon and much to my disgust they were too narrow, but not one word of protest/ So, I am sending them back and have ordered some which, I hope, will be wide enough. One thing, they are washable, as are the ones I have these days, and it makes them much nicer to use. Of course this means I have to stagger to the post office. Our car has been outside since Friday, Saturday everything that was wrong with me decided to let me know so I really couldn't go move the car and today I couldn't be bothered having told the deputy super about it, he said not to worry, so I didn't.

Saturday night I started watching Lawrence which is one of my favourite movies, in fact Peter OToole was one of my favourite actors. He was trained at the Bristol Old Vic (in England of course) and they produced some excellent actors in their time. However, I turned off the movie about half way as it wasn't going to finish til around midnight and then I had several tasks I always do before bed so it would have been gone 1 by the time I hit the sack. Matt was bored anyway, doesn't understand it any more I think. Of course, I do have it on VHS, taped it many a long year ago, don't know what state it is in but so far all the tapes I have watched lately have been in fairly good condition.

I kept telling myself I was going to order in this weekend but I never did. I am just as happy cooking most of the time, delivered food has still got to be served to Matt. Now if I could go out, different matter. American restaurants are opening I wish ours were. I keep getting emails from the Red Lobster telling me what they are doing about Covid-19 now they have opened their restaurants, but they are taking about the States. Doug Ford, our Ontario Prime Minister has not permitted ours to open yet.

Managed to get three more jars of asparagus done this weekend despite my aches and pains plus I canned a whole bunch of cut off stems (my bottles only take 6 inch stems) which are just in the fridge and can (and should) be eaten in the next week or two. Oh I forgot to tell you, which will delight you all I know, I have ordered some more lamb's kidneys from Victoria St. Market. I have also run out of Italian sausages so need to get some whilst I am there.

Hmm, the only trouble with this recipe, I used to be able to get really nice olives at my grocery store, but I don't seem to be able to these days. I guess I need to go into the store but that's easier said than done.

Grilled Asparagus and Tomatoes in a Kalamata Olive and Feta Vinaigrette 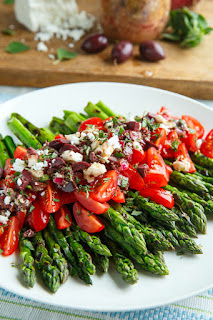